The main location is in Lancaster, PA, about 40 miles east of Harrisburg and 70 miles west of Philadelphia. The campus is a short drive from a thriving downtown Lancaster community that features excellent cultural, artistic, and dining experiences.

In 2013, LBC expanded beyond Lancaster by acquiring the academic programs of Capital Bible Seminary.

Guided by the leadership of current college president, Thomas L. Kiedis, Ph.D., this acquisition continues to build toward the college’s vision to be a premier, evangelical, globally accessible, technologically advanced institution of higher education.

To educate Christian students to think and live a biblical worldview and to proclaim Christ by serving Him in the Church and society.

College Verse: 1 Peter 1:25a, “But the word of the Lord endures forever”
College Hymn: My Hope Is In the Lord
College Colors: Black + Red (PMS 186)
Mascot: Charger

Lancaster Bible College | Capital Seminary & Graduate School is an equal opportunity institution that does not discriminate on the basis of race, color, sex (except where sex is a bona fide occupational qualification), ancestry, national origin, age, disability, veteran status, or genetic information. This policy applies to all terms and conditions of employment, admission to and enrollment with the College.

With a combined total of over 500,000 items, our Lancaster and additional locations comprises one of the largest among Bible colleges worldwide. Lancaster has 192,000 items, Washington location has over 10,000. In addition there are over 300,000 shared eBooks and over 50,000 journal titles available online to students at any location with internet access.

Meet the Faculty
You can meet our faculty, administration and several other employee groups by visiting our directory information.
Visit

Lancaster Bible College was founded by Henry J. Heydt in September 1933. Eight day students and 14 evening students were enrolled in the original class, which met in the Convention Hall at West Orange and Pine Streets in Lancaster. William J. Randolph ’50 succeeded Heydt as president. From 1954-1961, President Randolph moved the school toward accreditation, and the size of the campus grew, initiated by a gift of land in 1957 from Mr. and Mrs. J. Martin Esbenshade.

In 1961, the school’s academic dean, Stuart E. Lease, was elected president. During his 17-year presidency, the student body grew to more than 400 students, and the campus expanded to 36 acres. Finally, in 1973, the school earned provisional approval to grant the degree of Bachelor of Science in Bible, and the school officially became Lancaster Bible College (LBC).

When Dr. Gilbert A. Peterson began his duties as president in 1979, he focused on debt reduction. Within 5 years, LBC raised more than $500,000 toward financial stability and more than $1.5 million toward the school’s endowment. Additional land was purchased, bringing the campus size to 100 acres. 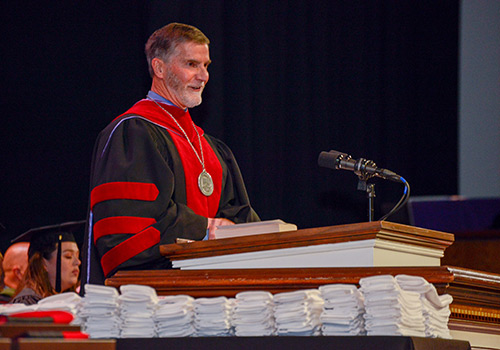 On February 1, 2020, Lancaster Bible College welcomed its sixth president, Dr. Thomas L. Kiedis. Dr. Kiedis comes to LBC from his role as senior pastor of Spanish River Church in Boca Raton, Florida where he has served since 2010. He is no stranger to LBC | Capital. He has been a member of the college’s corporation since 2012, an adjunct faculty member and served as the lead mentor for the church planting concentration of the Master of Arts in Ministry program from 2012 to 2018.

Earn an undergraduate degree in less time than you think through our online or one night a week in class.

Earn your masters, doctorate or graduate certificate in either our seminary or graduate school tracks.

Take Your Next Step at LBC