Ballroom dresses, tiaras, flowers, high heels and musical numbers may be what many people think of when it comes to pageantry, but Lancaster Bible College communication major and field hockey player Kayla Willing (’25) explains how it is so much more.

“Professionally, I’ve grown in many skills—public speaking, interviews and managing sponsor relationships,” she shares. “My faith has been tested and stretched throughout this experience.”

Check out a Q&A below with Kayla, who was named Miss Southern Maryland in the spring of 2022, to learn more about how she grown as an individual and as a Christian along her journey as a college student and pageant participant. 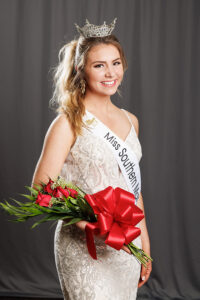 LANCASTER BIBLE COLLEGE: What made you want to compete in pageants?

KAYLA WILLING: Throughout high school, I was never considered a girly-girl, let alone a pageant girl. I was the girl who wore sweatpants and athletic shorts every chance possible. There was a girl on my field hockey team throughout high school who wanted to compete in a local pageant for fun. Every week she would ask me to participate with her, and I would give her a firm “no” on the basis that I would never think to put myself in a position like that. A few months went by, and her nagging became more constant and one day she essentially said, “Do it. You won’t.” To that I said, “I won’t?” And she replied with, “You can’t.” Being the competitive person I am, I felt at that moment I needed to prove her wrong. So essentially, my pageant journey began on the whim of a dare.

LBC: How did it feel to be honored with the title of Miss Southern Maryland 2022?

KW: It was a bit unreal just because of how unexpected it was. I had competed in a few other pageants that season and was convinced I had “1st runners up syndrome” considering no matter how hard I tried, I could never quite get first. This pageant was surprising because I honestly felt it was my worst performance of the season. After my interview, I felt I was shaky and not as smooth as I normally perform. Plus, there’s always controversial topics such as abortion, gender, education, etc., brought up, and considering I stand firm in my beliefs, my opinion on these issues is not necessarily in my favor.

However, I knew this was the last one of the season, and it was completely in the Lord’s hands if I were to go further. The day of the competition, I had come to peace with “1st runner up” once again, so when my name was called (as) the winner, I was in complete shock. I really felt, considering all odds were against me logistically speaking, it was the Lord’s will. 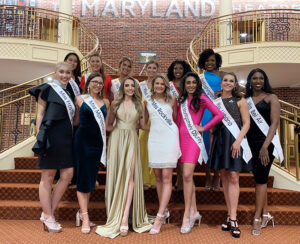 Kayla Willing (’25) stands with other title holders in Maryland.

LBC: What does your schedule look like as you prepare to compete in the Miss Maryland pageant happening June 19-25 at the Historic Maryland Theatre in Hagerstown, Md.?

KW: Extremely busy. What most people don’t realize about winning a local pageant is that once you win, you have an entire team telling you what to do, where to be and when to be there. Within your “prize package,” although the majority is scholarship, some local pageants set up their package so that many sponsors are specifically training for Miss Maryland. I have skill training, mock interviews, social media coaching, photoshoots, wardrobe reviews, makeup lessons and more. My pageant coach sponsor, Adrianna Davis, comes from New York monthly to coach!

Not to mention, as a titleholder you represent a physical area, thus you must make local appearances to those places. Balancing these meetings, appearances, homework, finals and practice time has been difficult but worthwhile. I should say that after Miss Maryland is over, my life will most likely slow down drastically (haha).

LBC: What made you decide to attend Lancaster Bible College?

KW: I wanted a school that was far enough from home that I felt like I was establishing my life apart from where I was from, but also somewhere close enough that if I were to wake up and decide to go home, I could be there by lunchtime. Secondly, I wanted a biblical education that would strengthen me in my faith to prepare me for the world. The double major feature that LBC has made it clear I was entering a group of like-minded individuals who are seeking the same education I am.

LBC: How have you seen your faith play out when competing in pageants? 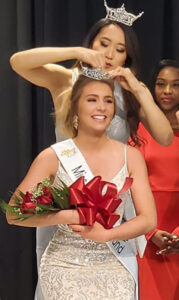 KW: I see my faith play out in every aspect of competing. Considering pageantry is a presumably secular and materialistic field, my faith first and foremost keeps me grounded. I understand where my worth comes from and who the glory goes to.

The largest phase of competition coming in at 35% of your overall score is the interview. This is a 9.5-minute interview between you and 4-5 judges. There, they can ask you about your resume, social impact initiative (this is essentially a platform you develop and advocate for), and anything else they see fit. This includes social, political or moral questions.

Considering I am someone grounded in biblical principle, my faith always shows through my interview. … As you can imagine, my answers are not often what is ideal in their eyes. However, I have come to learn that if you present truth in a means worth respecting, you will get respect, regardless of if they agree.

The relationships I’ve made through pageantry have also yielded themselves to some amazing conversations. One woman vocalized to me that she was an atheist due to hurt she had experienced from religion in the past. I am beyond honored that the Lord would use me in this instance to sympathize with her and form a relationship yet also be grounded in what I believe. At a teen state competition last year, when asked what I wanted the judges to know about me, I was able to say (in front of 700 people!) that in all things I want to know God and make Him known. From there I was able to give the gospel message! God is so good!

LBC: How do you see pageants being a part of your future and/or career path?

KW: Actually, I’d say pageants CHANGED my career path! When first deciding to go to LBC, I was going for Clinical Counseling. After the first pageant I won in 2020, I had so many opportunities to speak, develop a platform, write and advocate, I felt that is what I wanted to do for the rest of my life. Two weeks before my first day at LBC, I changed my major to Communication and haven’t looked back since. If I never entered that first pageant on a whim, I never would be at the place I am now.

Learn more about applying as an undergraduate student at LBC!