Beyond the Street Life | Marcos Mendez

The street life was once comfortable for Marcos Mendez (’21), 41, who is in the Adult Education program at LBC | Capital studying Biblical Studies with a minor in Business. It was all he knew as he watched many of his 11 siblings make poor choices related to drugs, women and addictions. He followed their paths.

At the age of 33, he was facing 11–22 years of prison on four charges related to drugs and aggravated assault. A plea deal was offered. He wasn’t serving the Lord and was angry. His response was no. “Everyone was mad,” he remembers. It wasn’t the only instance he faced prison time as he found himself in and out of the prison system from ages 18–33. 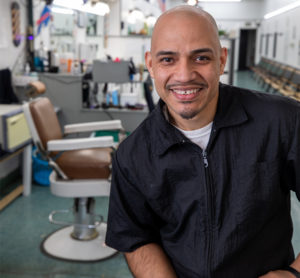 His educational journey started between prison stays in the 2000s. He was working a construction job when he was asked if he graduated from high school, with the further suggestion he should start his own company. As a result, Marcos started working on his business management degree at Harrisburg Area Community College (HACC) at the Lancaster campus. At one point, he was in school full-time and working part-time.

However, he found himself back in the jail system in 2008 as a mounting child support bill turned him back to easy and quick money through selling black-market movies. He remembers convincing himself that he wasn’t selling drugs this time and wasn’t harming people with this plan. However, he soon found himself pulled over by a police officer and spending 13 days in prison waiting for a court date. As a result, he missed his college classes and assignment deadlines. His semester was lost, and he found himself returning to the street life of selling drugs after he was released.

“I went back to doing what I was comfortable with,” he shares while further explaining he was sneaky about this, and some of his family members didn’t even realize he had returned to this life. Instead, they saw that he was caring for his mom, who was paralyzed from a stroke in 1997, and caring for his daughter, who is now 19.

In 2012, four months into one of his prison stays on drug charges, he went to the hole, or solitary confinement. “I was angry and a danger to myself and others. For the first time ever, I cried out to the Lord,” he recalls. He doesn’t remember what specific day it was as time blurs together in solitary confinement.

When he emerged from the hole, he called his sister, who was also caring for their mother. He told his sister he was done with the street life and was going to do something positive with his life. He also prayed before coming out of the hole that “if you want me to pursue You (God), put me in a cell with someone seeking You.” His next cellmate just happened to be an inmate who had a relationship with the Lord. This inmate helped nurture Marcos’ relationship with God.

Eventually, he was bailed out on the drug charges. He even repeated, “I’m done with the street life” to the bail bondsman. The reply he got was, “I’ve heard this before.” The bail bondsman recommended a Ready to Work (RTW) program for Marcos. It typically takes 31 days to complete. Marcos finished in 23 days. He had to chase down the bail bondsman to give him the paperwork to show he completed the program. The bail bondsman was shocked and told him no one had ever tracked him down, forgave the outstanding bail balance and told Marcos that God had great things in store for him.

During this time, Marcos started to share his story with teen programs, such as Teen Haven, and ministered within churches to help youth stay away from wrong choices like his. He also worked on earning his barber license, which only cost $50 to start. He was attending Bible studies and ministry programs, all to keep him on the right track.

Then he found himself back inside prison. When the time came for the court hearing related to the previous charges in question, carrying 11–22 years in prison, the one with the offered plea deal, he didn’t want to cooperate with authorities. He was fed up with his past lifestyle and tired of being in and out of prison. “I didn’t want to lie,” he shares. “I’m done with the street lifestyle.”

During his time in prison, while other inmates were starting to take college credits, Marcos used the time to study the Bible. After four years and two months of time served, he was released in 2016. “God put it on my heart to inquire about LBC | Capital,” he remembers. While LBC | Capital accepted most of his credits from previous college studies, he learned a loan default from 2008 and his time at HACC would delay his entrance. This meant six months of payments to remove the default status before his LBC | Capital journey could begin.

During this time, he earned money using his barber license, first at a barbershop with an environment in which he no longer felt comfortable, and then at the barbershop he now owns with another barber. “God placed the barbershop in my hands,” he shares about Manor Barber Shop at 1208 Millersville Pike in Lancaster. With his sisters, he has continued to care for his mom, who passed away in January 2020, and his dad, who has Parkinson’s disease and is now 91, all while studying at LBC | Capital with expected graduation in June 2021.

LBC | Capital has changed Marcos’ position on the church element and theological perspectives. “It has helped me see lot in a different light,” he shares. “You learn habits, ways and traditions. It has helped me understand the Bible. I see a lot of people are doing life wrong and not lining up with the Bible. I see how much people miss the mark and that has helped me make the mark. Through God’s sovereignty, it’s not me or us. It’s God.”

As for the future, Marcos wants to continue to minister to youth to help prevent any young person from going down a path similar to his. He also anticipates seeking a chaplaincy position at Lancaster’s youth detention center. Many of his siblings have now turned to Christ, and in the words of Marcos, “There is work to do for the Kingdom.”

“When I lost my mom, which was the hardest time of my life, the Holsingers were there every step of the way making sure things were taken care of for school, and they even came to my mother’s funeral,” he shares. “That meant so much to me.”

The Holsingers aren’t just there for Marcos at LBC | Capital. Angie is a financial aid coordinator, and Steve is an academic advisor for the Lancaster on-campus students who are in the Adult Education program.

“Marcos is definitely an example of living out the biblical mandate to care for and honor your parents,” shares Angie. “Marcos is well-loved by his classmates, and it was such a joy to see how they came alongside him to encourage him when his mom passed away. The Tuesday night Adult Ed. program has such a sense of camaraderie, and students genuinely care about each other.”

“I make it a point to be available to speak with students before class on Tuesday evenings,” Steven shares. “My goal is to build relational connections with the students, provide informal pastoral care when needed and promote a sense of Christian community among the adult students. I gradually started to get to know Marcos over time as we interacted before class on Tuesdays. This relationship was further cemented when Angie and I did our best to support Marcos after the sudden loss of his mother. We attended his mother’s viewing and did out best to care for him in that time, and I could tell that our efforts in that time after his mother’s unexpected death meant a lot to Marcos.

“The real story is Marcos and other students like him who sacrifice so much to study at LBC | Capital and be further equipped for service in God’s kingdom,” Steven adds. “It is amazing to me to see him and other adult students weather such difficult storms in life and yet remain committed to their Christian education because of a call to do so.”