I want to share a bit of my back story so you can see how God has been orchestrating my life to get me to this place. I was not your typical college student when I began evening classes at Lancaster Bible College in 2015. For a long time, I had been feeling the nudge to go to college, but I had not found a good fit or strong enough motivation to take the step. What would I do with a degree at my age anyway? I was busy raising and homeschooling my kids, now ages 31, 28 and 25, and really didn’t have the time or money. 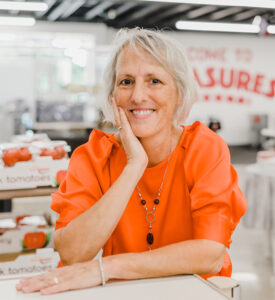 But once my last child had graduated from high school, God really started working in my heart. At this time, I was working in the office of a grocery warehouse. I was witnessing the older warehouse personnel who were challenged physically and had difficulty keeping up with the younger employees. Conversely, the younger employees had the physical ability but lacked the skills, not only to do the job, but to function well in the work world. Instead of working together as the team that was needed to reach top productivity, they were competing. The company set up programs to motivate, but these programs inadvertently pitted the generations against each other.

The older generation had something in their background that kept them from being able to be promoted or progress to better paying jobs. For example, one situation was a man who had at one time had a degree in a field that required continuing schooling for the skills to stay current. He had quit a lucrative position to help with a family business and, when the business failed, he had nothing to fall back on. Other cases involved employees with substance abuse issues in their pasts. As a result, they lacked self-esteem, were often discouraged and often resentful of the younger employees.

The younger generation, many who had difficult home lives as children, had dropped out of school, did not know how to function in the work world and, therefore, were unable to stay employed, creating a barrier to career advancement. They would not show up for work, would quit without notification and would often fight while on the job.

My heart and focus was on caring for these employees as God created and valued individuals. But also, the sad reality is that a large portion of our current and future workforce lack the needed skills to function in the workplace, and this will be a detriment to future productivity. Companies need to know how to grow quality employees and how to train them to work together as a team versus competing. My dream became to start a non-profit that would teach the youth how to function in the workplace with the assistance of mature mentors who were already employed, but I felt completely inadequate for the task.

With this feeling of inadequacy, I was now aware of God more strongly nudging me, and true motivation to take college classes had taken root. In the fall of 2015, while reading through LBC l Capital’s ECHO Magazine, I discovered a blurb announcing that LBC l Capital was offering Business Administration classes in their night schedule. A few years prior to this, I had checked with LBC l Capital but at that time, Business Administration wasn’t being offered as evening classes. God’s timing is perfect! I think I read the article two nights before the information meeting and my husband, Scott, was a bit hesitant, but I talked him into going to the meeting with me. LBC l Capital offered the first class free if we chose not to continue. This was an offer I could not refuse and knew by the end of the meeting that I was going to take that first class.

The first class was Biblical Hermeneutics with Dr. Timothy Nichols, and my head was swimming with terms I had never heard before. During a break the first night of class, I texted my husband and son and told them I didn’t think I was going to be able to drive home—that they might have to pick me up. I had been up since 5 a.m. and had gone to school directly from work. But a few weeks in, I had adjusted and absolutely fell in love with the class, and I knew then I was hooked and would be graduating with a degree.

A switch in April 2016 from a full-time job to a part-time job helped with this adjustment, and God, in his always-exciting and interesting ways, connected me to a non-profit organization that provided foster care, adoption and refugee services. God uses every situation, so during the interview I shared my dream of creating a mentoring system, learning that there, at one time, had been a division at this organization that helped youth aging out of the foster care system to transition into independent living. However, it was no longer functioning. It was not long before I knew that my dream organization would be focusing on these youth.

I still dream of starting my mentoring organization after I retire, but for now, I’m learning and loving being able to work for an organization, Treasures Markets, whose goal is to invest in the people of the Lancaster City community, whatever their current challenges or history may be.