In Small-College Basketball,
LBC Is Finding a Way to Play

(This article originally appeared in LNP | LancasterOnline on Feb. 20, 2021.) 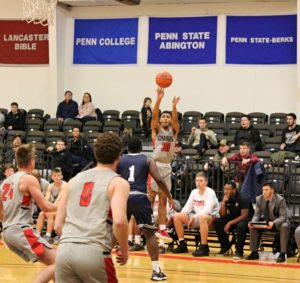 Of the over 400 universities that have men’s and/or women’s basketball programs in NCAA Division Three, nearly half, of each gender, are not playing as this is written.

The hoop drought is more acute in the Northeastern and Mid-Atlantic regions. The Middle Atlantic Conference (Lebanon Valley, Albright, et al) started playing a truncated season last week. Franklin & Marshall, and its Centennial Conference, are considering a return to play that may or may not include basketball, no earlier than late March.

“We don’t spend much time focusing on what either schools are doing,’’ LBC athletic director Pete Beers said.

“One hard part with higher education is there’s a lot of concern about liability. We prefer to focus on possibility.’’

To that end, LBC adopted the same program of pandemic mitigation as Division I four months ago. The approach to scheduling was pretty much to take any games it could get.

“Number one, it’s consistent with the mission of our school to use athletics to send our message,’’ second-year coach Jon Mack said of the motivation to play.

“Number two, the student-athlete experience matters to all of us.’’

So the players have done daily screening, and thrice-weekly testing, for the coronavirus. They have been formed into pods, three players to a pod, that sit together, travel together, eat together. This in addition to the usual masks and social distancing.

Problem: The first round of tests for the men’s team, in November, came back with six positives.

The first five scheduled games, including Division I James Madison, Radford and VMI plus a two-game trip to face Christian schools in Michigan, had to be scrapped.

The season finally started the last weekend in January. On Feb. 3, the Chargers went to D-1 Delaware State, where they had a seven-point lead with 2:45 left but lost, 81-80.

A weekend trip to play Southern Virginia, a D-III in Beuna Vista, Va., was lost when the hosts had to quarantine.

Mack took to Twitter, with an open call for opponents.

Liberty answered. Liberty, which played in the Big Dance in 2019 (the last time there was one), and is 17-5 this year, including wins, by double-figure margins, over South Carolina and Mississippi State, offered to pay for LBC’s travel, food and hotel and throw in some cash.

“It was pretty cool,’’ Beers said. “Our kids were pretty excited.’’

“I was very interested to see how much of a difference it was,’’ said Jordan Shewbridge (pictured above), a sophomore guard from Garden Spot who leads LBC in scoring.

“We got beat up pretty bad. But as far as their guards, I thought I was athletic and quick enough to somewhat keep up with them.’’

Shewbridge was by his own admission not much more than a shooter in high school.

Mack said he’s learned to “get downhill,’’ and attack the basket more, and added that the current project is, “getting him to be an elite defender.’’

“Seeing where I am now,’’ Shewbridge said, “it’s definitely been a transformation.’’

He’s scoring 16.4 a game, not counting 34 in an exhibition with Mary Baldwin College.

Shewbridge is one of seven Lancaster-Lebanon League alums on the roster, including freshman Seth Beers, Pete’s son, the former Lampeter-Strasburg star who’s the point guard of the future and to an extent the present; despite not starting he’s second on the team with 26 minutes per game.

One Charger, freshman guard Mytchell Parmer, has missed the season so far to work security around the U.S. Capitol Building as a New Jersey National Guardsman.

The schedule remains eclectic. LBC has played Salisbury three times, winning the last of those the day after losing the second by 18 points. The Chargers (4-4) will play Bryn Athyn College four times between now and March 6.

There could even be a postseason, either in the National Christian College Athletic Association tournament or a sort of NIT-style event, in lieu of an NCAA Division III tournament.

“I’m thankful for how diligent the school has been,’’ Shewbridge said. “I’m thankful, just in general, for being able to play.’’

Keep up with all the LBC sports action!