It’s Never Too Late to Go Back to School – Just Ask Michael.

Ever since he can remember, Michael Dickerson (‘21) has had the gift of caring for people. Growing up in northwest Washington D.C. in the 1960s and 70s, a young Michael often would get up early and fix his parents’ lunch while they were busy getting ready for work. That gift continued through his adult years, as Michael enjoyed visiting people at the hospital long before he ever considered doing what he does now. Today, he serves as a hospital chaplain, helping patients and their family members during challenging times.

Lancaster Bible College is helping Michael, who turned 58 on January 27, achieve his goals through attending classes to earn a bachelor’s degree at the college’s Washington D.C. location. For the last year, he has been a student in the accelerated biblical studies program, and plans to complete his undergraduate degree in 2021. “I realized that education would be more of a benefit as a chaplain, and it has grown to be just that,” said Michael, who retired from his job at Washington’s Howard University in 2009. “My time at LBC is allowing me to grow into a better understanding some of the technical aspects of my calling as a chaplain.”

While he was working at the university, serving as a library technician who worked with student financial accounts, he became a volunteer chaplain in 2008 first. “My responsibility was to open the chapel with prayer each Sunday morning, as well as visitation in the emergency room,” he explained. “That experience quickly educated me on the intricacies of hospital visitation – how long to stay how to listen to the patient, to not try to come into the room with all of the answers. Those practices I found to be important as well as wise.” From there, he began seeking out more chaplaincy work. “After retirement from the university, I increased my hours of visitation. From there, it morphed into an on-call chaplaincy position.”

He now serves in a full-time position as the manager of pastoral care services, with a staff of five part-time and volunteer chaplains. God did it, Michael said: “I had no immediate plans of working after retiring. I can’t say I knew what I wanted to do in life at that point.” Michael, who takes night classes at the college’s D.C. location, emphasizes that he loves his duties as a chaplain, and loves seeing the progress of patients and families. But it sometimes isn’t for the faint of heart, he said. 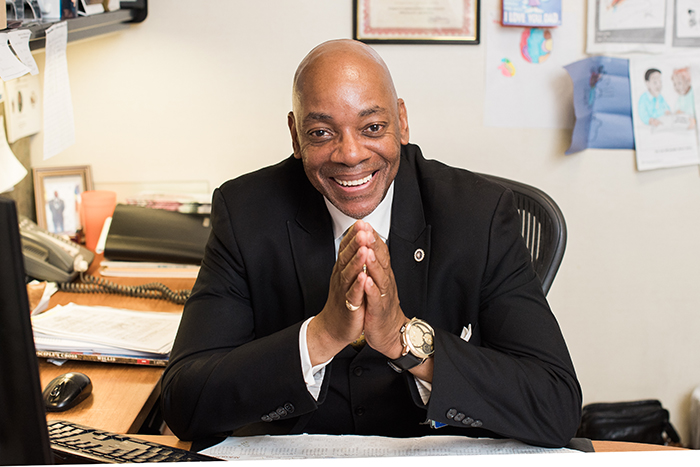 Above: Michael Dickerson pauses for a portrait in his office at Howard University Hospital, where he serves as a chaplain.

He and his wife of 27 years, Cassandra, have no biological children: “However, we have contributed to the lives of so many, to the point we are looked upon as parents.” They currently are partnering with a young woman in raising her daughter. The youngster has been with the Dickersons since she was six months old. “The experience of taking her to school and helping with her homework, as well as my own schooling, has brought about a, shall we say, different kind of experience than I thought I’d be doing at this point in my life,” Michael said, laughing softly. “But I think that what has transpired in my life has prepared me for this. She’s the joy of our lives, and if I had to do it all over again, I would do the same thing.”

Michael cites as a favorite Bible verse 1 John 3:2: “Beloved, now we are we the sons of God’s, and it does not yet appear what we shall be: but we know that, when we he shall appear, we shall be like him; for we shall see him as he is.” To Michael this means, “I am who He is in the earth, and I am to bring the likeness and the authority of Christ to those I encounter on a daily basis.”

Michael, who lives outside Washington in suburban Maryland, belongs to Christian Tabernacle Church in Washington D.C., where he also serves as pastor of pastoral care. The position involves congregational and community care and the role is well-suited for Michael – something that he thrives on doing. “I didn’t grow up going to church,” he said. “I went from time to time; however, there have been a lot of things about the relationship between man and God that I have learned in my latter years. It has been a journey, and one that I appreciate.”

Do you want to study the Bible in D.C., Lancaster online?