(This article was originally posted on lbcchargers.com.)

The inaugural class of the Lancaster Bible College Athletics Hall of Honor features some of the best student-athletes in the school’s history, as well as Beers who helped transform and shape the department to what it is today. Pete Beers began at Lancaster Bible in 2000, and in addition to his role as the director of athletics, Beers was also named men’s basketball head coach. He also had coaching stints with the women’s soccer, men’s soccer and baseball programs. As men’s basketball head coach, Beers compiled a record of 141-208, while leading the Chargers to the 2007 and 2011 NCCAA East Region Championship. The program appeared in the 2010 and 2011 NCCAA Division II National Tournament under Beers, and his 141 wins are still the most in program history. In addition to mentoring and guiding student-athletes in the men’s basketball program, Beers’ biggest contributions came in shaping the athletic department at Lancaster Bible.

An NCCAA-only school when he arrived, Beers quickly began playing NCAA Division III teams, as did many of the other programs at the school. The Chargers officially began the process of becoming an NCAA Division III school in 2007, and on September 1, 2010, celebrated their official membership. Beers was also instrumental in Lancaster Bible hiring full-time coaches for many of the programs, and spearheaded improvements to the Horst Athletic Center and the construction of the Donald H. Funk Field at Willis & Martha Herr Stadium. Throughout his entire tenure as Lancaster Bible Director of Athletics, Beers’ focus has been on impacting the lives of student-athletes and growing their platform to proclaim Christ. He has been, and continues to be, a firm believer in the classroom of athletics, and positioned Lancaster Bible Athletics in a strong place for years to come. Lambertson was named 2012 NEAC Women’s Soccer Player of the Year, and was a NEAC All-Conference selection in each of her four seasons, including three straight NEAC All-Conference First Team selections from 2012-14. Lambertson’s 20 goals during the 2012 season are the second-most in a single season in program history, as her and teammate Whitney (Heise ’13) Whaley finished 1-2 in scoring in the NEAC in 2012.

Lambertson was selected to the NCCAA Division II All-American First Team in 2012 and 2013, and was also the 2012 and 2013 NCCAA East Region Player of the Year. In addition to her play on the field, Lambertson was also named to the 2014 CoSIDA Academic All-District Team. As Lambertson’s collegiate career was ending, Aubrey (Folger ’16) Bird’s was just taking off, as she was on her way to becoming the most decorated basketball student-athlete in Lancaster Bible history. Bird helped the Chargers to the 2013 NEAC Women’s Basketball Championship during her freshman season, and was named NEAC Rookie of the Year the same year. Bird’s junior and senior seasons were dominant, as she was named NEAC Player of the Year in each year, becoming the first back-to-back winner of the award in conference history.

Bird finished her career with 2,141 points, the most in program history, and is second all-time with 1,249 rebounds. Bird compiled 68 career double-doubles, the 14th-most in NCAA Division III history, and she is one of 19 players in NCAA Division III history with 2,000 points and 1,000 rebounds. Bird was a four-time NEAC All-Conference First Team selection, the only player in program history to accomplish the feat. Bird is the program’s all-time leader in blocks with 125 and games played with 116. She was named to the D3hoops.com East Region First Team in 2015-16, and was a three-time NCCAA All-American. Bird’s appearance on campus for the 2012-13 season coincided with Lauren (Heliger ’13) Turner’s final season in a Chargers uniform, and the duo combined to lead the program to its only NEAC Women’s Basketball Championship and a 24-5 record. Turner was the leader of the team and led the Chargers with 16.6 points per game, and also chipped in with 5.1 rebounds and 4.1 assists per contest. She was a two-time NEAC All-Conference First Team selection, as well as a two-time NCCAA Division II All-American. Her 1,516 points were the most in program history when she graduated, and she is currently fourth on the all-time list. Turner’s 347 assists are the third-most in program history, and her 547 career rebounds are the seventh-most in program history.

Turner’s strong play wasn’t limited to the basketball court, as she is one of the best women’s volleyball student-athletes in program history. Turner is the program-leader in kills with 1,286, and the only player to have over 1,000 kills. Turner is second all-time with 1,778 digs, and her 137 aces are the 10th-most in program history. She was named an NCCAA Division II All-American in 2011 and 2012, and was NCCAA East Region Player of the Year in both years as well. Both Bird and Turner were named to the Lancaster Bible College Women’s Basketball 50th Anniversary Team earlier this year. 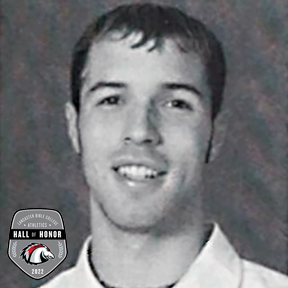 The final inductee of the Lancaster Bible College Athletics Hall of Honor Class of 2022 is former men’s basketball standout Sam Rempel (’01), the men’s basketball program’s all-time leading scorer. Rempel’s final season with the Chargers was Beers’ first year as head coach, and the pair helped guide Lancaster Bible to a 19-8 overall record, a then program-record. Rempel scored 724 points during his senior season, and was named to the NCCAA Division II All-American First Team. He was an NCCAA East Region First Team selection in 2000 and 2001, and was named NCCAA East Region Player of the Year in 2001. Rempel’s 1,979 points are the most in program history, and his 23.6 points per game are the second-most.

Rempel’s dedication to the program was evident from day one, and his ability to make his teammates better left a lasting impression not only with them, but his coaches as well. Rempel was part of some of the biggest wins at the turn of the century, and helped build the foundation that Beers and many others have expanded on since. In addition to his hall of honor recognition, Rempel was also honored in February as part of the Lancaster Bible College Men’s Basketball 50th Anniversary Team celebration.

The class of 2022 will be honored at a special dinner on Sept. 23 and publicly honored prior to the women’s soccer Homecoming contest on Sept. 24. Saturday festivities will begin at 11:30 a.m. at the Donald H. Funk Field at Willis & Martha Herr Stadium. Lancaster Bible will also soon unveil a new interactive touchscreen display in the lobby of the Horst Athletic Center.

Don’t miss the action of Homecoming 2022!

GET ALL THE DETAILS & REGISTER