Several students at Lancaster Bible College discovered their passion for supporting trafficking survivors and the importance of raising awareness on the topic of human trafficking. 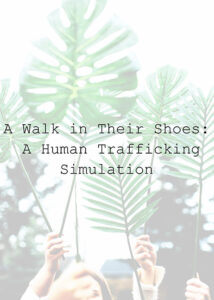 Madalyn Braun (’20), Ashlyn Fabrick (’20), Alex Figart (’21), Haylee Fishel (’21), Deanna Graber (’22), Jack Hayward (’22) and Cambrie Miller (’21) collaborated to create a trafficking simulation during a project for Dr. Ling Dinse’s Social Work on Human Trafficking class. The objective was to develop a simulation based on labor and sex trafficking cases to both educate and create an understanding toward those trapped in these scenarios.

Unfortunately, the simulation was unable to run at LBC due to COVID-19, however, the students were able to find an organization that benefitted from their hard work. She’s Somebody’s Daughter (SSD) is a faith-based organization offering support to survivors of sexual exploitation. SSD Executive Director Andrea Meyers was encouraged that the LBC students provided the simulation to the center to support its trafficking awareness initiative.

“We had a wonderful experience collaborating with LBC students in creation of a Human Trafficking Simulation, which has been extremely beneficial in our Awareness Initiative,” Meyers said. “The students did a great job bringing home complex issues.”

Meyers and her team recently presented the LBC trafficking simulation program at a local group home for girls in the foster care system. She expressed how she witnessed so many of the girls fully engage in the trafficking simulation. “The goal of the simulation is to walk participants through a common scenario of trafficking, raising understanding of the many layers faced by survivors as well as equipping youth to spot red flags and remain safe,” she said. The seven students who worked on this project are helping to make a difference in the SSD community and spread compassion beyond LBC’s walls.

A few of the individuals who worked on the simulation commented on what they learned and were able to take away from this experience. Here are their responses:

Jack Hayward: “In light of working on the simulation, I valued the hearts of my peers as they wanted to give their best effort in creating a simulation that would help people become more aware of the pains of trafficking. I learned that this project wasn’t just another grade. It was something bigger than ourselves, and I’m thankful for all God has done with it.”

Deanna Graber: “Producing an entire trafficking simulation was certainly no small feat and required time, research, teamwork and abundant encouragement from Dr. Ling. There are many misconceptions and myths about people who are trafficked, and the simulation required me to ponder what it would feel like to be without resources and connections, or to feel completely trapped when every door of escape slams in one’s face. I now also have a deeper compassion for individuals whose complicated life looks entirely too similar to the simple simulation we created.”

Cambrie Miller: “I realized that the issue of human trafficking was something I was passionate about addressing and was excited to see how it would incorporate in my studies of criminal justice. Dr. Dinse’s class was unique in the fact that she did not want us to write papers we would forget, complete homework we would half-heartedly engage in or memorize facts for exams we would skim over. Dr. Dinse provided us with the simulation project as not only a way to obtain a grade and show our engagement but as a way we could truly offer something tangible to the anti-human trafficking efforts. Through the project, I not only experienced a taste of the horrors women and children go through around the world, but I also learned about how important it is to educate others. The simulation, although cancelled at LBC due to COVID, was an opportunity for my class to provide awareness, build community and offer something concrete for the cause. I was blessed by LBC and Dr. Dinse offering me the opportunity to participate in something bigger than myself, and I hope others are blessed by what we created.”