My name is Cierra Michele Woods (’21) and I am 27 years old. I was born in Baltimore, Maryland, and raised in Brooklyn, New York. I have been married to my high school sweetheart for four years, and we have a beautiful 2-year-old daughter. My husband and I are currently dual military and commissioned officers. He is a 2nd Lieutenant in the United States Air Force, and I am an ensign in the Navy. I served over seven years in the United States Marine Corps (sergeant). Joining the most elite force in America was one of the best decisions I have made. During this time, I served as a warehouse/fiscal clerk. I deployed to Afghanistan, earned my bachelor’s degree in criminal justice administration with a concentration in human services from the University of Phoenix in 2018 and earned two Navy Achievement Awards for my superior duties.

Why I joined the Marine Corps

I was 8 years old when my mother suddenly died of a heart attack on September 5, 2000. At that time, I had no desire to do much of anything without her. My father had to do the best he could raising six children without the love of his life. God placed people in our lives that helped my father feed us and clothe us, namely my Grandmother Diane, Grandmother Robinson and the church family. I found my purpose to serve others when I entered high school in the JROTC program. I quickly moved up the ranks and became one of the leaders of my flight. When I realized college wasn’t for me during my sophomore year of high school, I knew I had to do something else. I enjoyed being a leader in a military environment, so I decided to join the United States Marine Corps without consulting anyone because I did not want any negative feedback. After I scheduled the ASVAB test, I told my father, and he was very supportive. Since being in the Marine Corps, I have inspired so many others to join and do well at their jobs and leadership.

My Journey to LBC | Capital 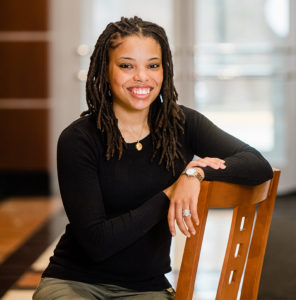 My educational journey leading to LBC | Capital was in the opposite direction because I was pursuing a degree in criminal justice. Toward the end of my program, I lost the desire to go forward with my plans of becoming an FBI Agent. It was hard, because I lost my purpose. Initially, I knew my purpose was to serve my country, but I felt something was missing. I could not figure out what it was.

One day, one of my best friends, Norma, invited me to a Bible study held at our unit. During this point in my life, I had not attended church for six years because I felt people were hypocrites and did not live the life they preached. I experienced this from my grandfather, who was a deacon. I accepted her offer, and that Bible study was the start of a new beginning. I realized I was missing a relationship with God. After rededicating my life to Christ, I finally began to feel complete. The change in my life was so great that everyone could see I was much happier, more loving and vibrant overall. I remember praying fervently, asking God to guide me into doing what He wanted me to do—and whatever He was calling me to that He would give me the courage to do it (Matthew 7:7-8).

Before long, the chaplain of my unit sent me an email and asked that I come to his office. I made time to see him, and he presented me with Chaplain Candidate information. I was not expecting anything like this to happen. I simply could not believe it. I believed I was not good enough because I did not attend church or prayed as often as I should have. “I understand why you feel the way you do, but a calling is unique to everyone,” he said to me. “Don’t devalue yours just because it doesn’t sound like someone else’s. I believe God has called you to be a chaplain, and some days you’ll feel it stronger than other days.”

His words have stuck with me ever since. As I prayed to ask God to lead me into making the right decision, I found myself looking into different seminaries just as thrilled as a kid waiting for the ice cream truck.

I chose LBC | Capital because (the) blended courses aligned perfectly with my active-duty schedule, and it was relatively close to where I lived. The passion the teachers have and the relationships I have made with classmates are what make LBC | Capital special. The professors are very knowledgeable and wise, and they truly invest in each one of their students. My husband and I have recently received orders to move to North Carolina. I do not mind driving four hours every nine weeks because I love this school and the environment so much. I will continue to pursue my Master of Divinity at LBC | Capital.

Whenever I’m asked about the future, I reference two of my favorite scriptures: “For I know the plans I have for you, declares the Lord, plans for welfare and not for evil, to give you a future and a hope. Then you will call upon me and come and pray to me, and I will hear you. You will seek me and find me, when you seek me with all your heart” (Jeremiah 29:11-13, ESV); (and) “Trust in the Lord with all your heart, and do not lean on your own understanding. In all your ways acknowledge him, and he will make straight your paths” (Proverbs 3:5-6, ESV).

These Scriptures remind me that self-sufficiency without God is not good. Life is like a roller coaster. When I grow weary, all I have to do is pray, and God will take care of whatever I am going through. Upon earning my Master of Divinity, the Chaplain Candidate Program for the Navy requires that I complete two years of post-experience in ministry.

I plan to serve at the church I will attend when we are settled at our next duty station, as well as obtain Clinical Pastoral Education units. After I am done with getting the required experience, I plan to supersede, so I can become an active-duty chaplain, serving the Lord and my country!

Do you want to study at our Washington, D.C., location?