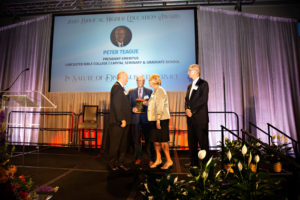 ABHE is comprised of more than 200 institutions of biblical higher education and is one of the accrediting bodies of LBC | Capital. To receive this award, the candidate must be a committed Christian who demonstrates a life of integrity, have made significant contribution to the Association, and ensured integrity and consistency in implementation of the Association’s standards and policies, among other qualities.

“I am so thankful for the many friends and mentors who are a part of our Association who have taught me, blessed me, and encouraged me and who have rekindled my inner spirit these many years while serving together,” says Dr. Teague. “For me, the significance of this award is tied directly to the ABHE friends who have so positively influenced my life.”

Dr. Teague was president of LBC | Capital for 21 years and now serves as President Emeritus and LBC Ambassador for the College. During his tenure, LBC | Capital’s enrollment tripled in size. Under his leadership, LBC | Capital emerged from a quiet existence to one of growing prominence. National recognition ranges from the Association of Biblical Higher Education to the Wall Street Journal.