It was an early Christmas surprise this summer when Sight & Sound Theatres based in Lancaster, Pa., made a monumental announcement—one with Lancaster Bible College connections. The ministry known for “bringing the Bible to life” through inspiring stage performances in Lancaster as well as Branson, Mo., is branching out to reach even more people and share the gospel even further. 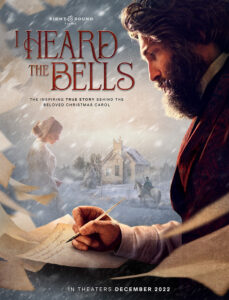 , a new facet of the ministry announced on June 17, 2022, will tell true stories about historical figures whose lives changed the world because Christ first changed them. Sight & Sound Film’s upcoming feature-length film, “I Heard the Bells,” stars Stephen Atherholt, who’s served as LBC’s Director of Musical Theatre Studies since the summer of 2021.

Atherholt plays Henry Wadsworth Longfellow in “I Heard the Bells,” which will debut at more than 1,000 theatres nationwide in December 2022. Known as America’s Poet, Longfellow leads an idyllic life—until the day his world is shattered by tragedy. With a nation divided by Civil War and his family torn apart, Henry puts down his pen, silenced by grief. But it’s the sound of Christmas morning that reignites the poet’s lost voice as he discovers the resounding hope of rekindled faith.

“I Heard the Bells” was two years in the making, and in fact, Atherholt was shooting the film during his interview process with Lancaster Bible College. During his first few days on campus as a new staff member, he explained away his bushy beard, stating that he was filming some movie scenes but was mum on the film and the Sight & Sound connection.

Keeping the secret was also tough for Katie Miller, Sight & Sound Director of Marketing & Communications and the oldest grandchild of Sight & Sound’s founders, Glenn & Shirley Eshelman. Miller first stepped onto the stage at 4 years old and throughout her 30-year career has served in various capacities within the company, including human resources, marketing, branding, advertising, public relations, corporate communication, business development, and now, in the promotional aspect of Sight & Sound Films.

Miller told the local Lancaster County newspaper, LNP | LancasterOnline, that the theatre company’s decision to make movies was sparked by looking for new ways to tell stories. The idea was born around 2018 or 2019, but filming didn’t begin until January 2021.

“It has been a long, long secret to keep,” Miller told LNP. “We’re really excited to be able to take our storytelling beyond biblical characters. That has been a pillar for who we are. While this is a little bit of a step, we’re excited to venture into new stories of inspiration and faith.” 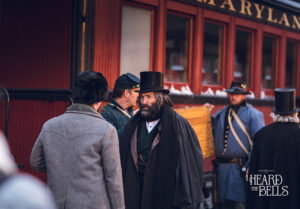 The local connections to “I Heard the Bells” will extend to movie theatres as well. Distributed in part through Fathom Events, the film will debut in select theatres across the country, including Penn Cinema in nearby Lititz. Fathom Events works with more than 1,100 cinemas in North America, on 2,100 screens in 44 countries and through 1,400 churches. After the theatre run, “I Heard the Bells” will be available on Sight & Sound TV, the theatre’s streaming service launched in the summer of 2020 that today reaches viewers from 165 countries.

Atherholt’s connection to Sight & Sound is nothing new. He’s performed in Sight & Sound productions for more than 12 years, including as Jesus and Adam in “In the Beginning,” multiple roles in “Miracle of Christmas,” Hiram in “Ruth,” Judas and Caiaphas in “Behold the Lamb,” the Ship Captain in “Jonah,” Japheth in “Noah,” and Simeon and Pharaoh in “Joseph.” Over the years, Atherholt also served as a Sight & Sound stage combat director and choreographer.

In “I Heard the Bells,” Atherholt stars alongside Rachel Day Hughes, who plays Longfellow’s wife, Fanny, and is known for her role as Mary in Sight & Sound’s production of “Jesus.” The Longfellows’ two sons are played by Jonathan Blair (Charles), one of two actors who played Jesus, and fellow Sight & Sound actor Zach Meeker (Ernest). Three of Henry and Fanny’s daughters are also depicted in the film.

Cast, crew and extras for “I Heard the Bells” totaled more than 200 people, as they filmed in Lancaster, Gettysburg, Elizabethtown and Strasburg from January 2021 to April 2022. Constructed specifically for “I Heard the Bells” was a full-size church on the Sight & Sound property in Ronks, Pa., where a barn was also renovated for filming purposes.

Watch the trailer for ‘I Heard the Bells’ below!

Originally, Atherholt shared, Sight & Sound’s foray into movie-making was meant to be a short film of 20 to 30 minutes. But a now-all-too-common phrase—“then COVID hit”—changed everything. The Sight & Sound theatre was dark, so many of the regular Sight & Sound responsibilities were on hold or delayed. About halfway through 2021, filmmakers realized they had over 90 minutes of high-quality footage. Adding just a few more scenes would take the film from short to feature length.

Atherholt specifically remembers a shoot on a cold day in February 2021. He and a small crew headed to a cemetery where a beautiful layer of snow had fallen. Just a month into filming, Atherholt’s beard hadn’t filled out, and he was without his Longfellow wig. But there was something special about the day, as he brushed the snow away from a tombstone for a moving scene. From that day on, each shoot was a bit of a learning experience as the cast and crew became more and more connected to the film.

Throughout the filmmaking process, Atherholt worked closely with “I Heard the Bells” writer, producer and director Josh Enck, who joined Sight & Sound in 1995 as a stagehand with a passion for storytelling. Today, he serves as President and Chief Story Officer, responsible for spearheading the unique creative process from production and product development to leading Sight & Sound into the next chapter. 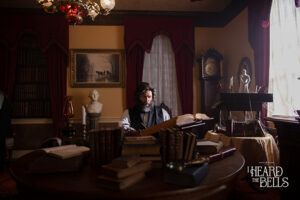 LBC Director of Musical Theatre Studies Stephen Atherholt stars as “America’s Poet,” Henry Wadsworth Longfellow, in “I Heard the Bells,” due out this December from Sight & Sound Films.

Despite his longstanding relationship with Sight & Sound, Atherholt didn’t automatically get the Longfellow role. He recalls that Sight & Sound called on four or five actors to audition at the barn on the theatre’s property—and, as Atherholt says, “put him through the ringer.” It was an emotionally exhausting day, with much emotion in the trial-and-tribulation-laden scenes. He experienced profound sadness, complete with tears, anger and more on his way to securing the role.

But now, with the filming behind Atherholt and others, “I Heard the Bells” is in the next filmmaking phases: color correction, audio correction and scoring, or adding the original music soundtrack to the movie. Atherholt said the measured pace of the filmmaking process made it a blessed experience for all involved.

“The Lord really spoke to Josh and said, ‘Take it slow; don’t rush this,’” Atherholt said. “For Sight & Sound, and for all of us involved, it was such a blessing to take it slow because we learned so much after every shoot.”

The cast and crew won’t be the only ones learning from this film process. Atherholt is able to bring his involvement with the movie to the Lancaster Bible College classroom, as students across various majors will benefit by learning from his experiences.

“What I learned walking through this character is very helpful in talking to the actors, especially in the advanced acting classes,” Atherholt said. “Plus, in the fall of 2022, we’re offering a media performance skills class with a specific focus of on-camera work in the TV and film industry. It will also be a cross-listed class with Media Arts Production students. Toward the end of semester, they will be shooting their own film scenes as well as learning voiceover skills.”

Besides the valuable lessons for LBC students, Atherholt hopes moviegoers will take away a powerful message from “I Heard the Bells.”

“If I were to distill it down, it is that in our darkest moments and deepest pain, God still speaks—through Scripture and the people around us,” Atherholt said. “He’s not dead. And for people who have lost loved ones, the holidays are especially difficult. This movie is about losing loved ones and losing yourself through that loss. But we can be reminded that we are not alone. Even if it may feel like God is silent in the midst of that pain, He is not. He is speaking. We just have to be able to hear him.”