’20 Graduate Writes a Novel for Her Senior Communication Project 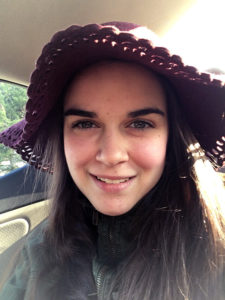 Emily (O’Neill ’20) Swafford wants to tell you a story—and it’s going to be good!

The LBC | Capital December 2020 Communication graduate from Wilmington, Delaware, penned a novel—in the works for more than five years—for her senior project. She began writing her book, “Grass Stains,” when she was 15 years old.

“I had attempted other novels before that, but this was the first one I thought had any chance of going anywhere,” Swafford said. “I remember being frustrated by the lack of quality stories for people my age. Most of the movies and books for teenage girls were either dark and inappropriate or sappy and predictable. I knew I couldn’t be the only girl who wanted adventure without gore, romance without sexualization and suspense without horror. So I wrote ‘Grass Stains’ in an effort to fill that gap.”

Swafford originally had “big dreams” that her book would be a best-seller and would become a movie (starring Orlando Bloom, of course).

“But that isn’t going to happen, and I am not disappointed,” she said. “I still think the book accomplishes the goal I originally set for it. ‘Grass Stains’ has evolved dramatically in the past five years as I’ve written and rewritten it countless times. The plot and characters are so much deeper and more personal than they were back then, especially as I’ve faced new life experiences that have expanded my understanding of the world. However, there’s still a youthfulness and naivety about the way it is written that limits its target audience. Even though ‘Grass Stains’ may not be a riveting novel that engrosses every single reader who picks it up, as I originally dreamed, I know that 15-year-old me would have loved it. And that’s a win.”

“Throughout their Communication & Media Arts program,” he said, “students have been mentored by faculty, worked alongside their peers and worked under communication professionals in their internships. The senior project asks them to showcase their talents when they are in complete control of a project from its conception though production and delivery to an external audience.”

He added that Swafford—even though “Grass Stains” was started years before she enrolled at LBC | Capital—was able to mature in her writing, change some plotlines, deepen character development and re-edit her earlier manuscript, as well as research and apply the skills of self-publishing, manuscript formatting and cover design.

Learn more about this promising author through the Q&A between LBC | Capital and Emily Swafford below: 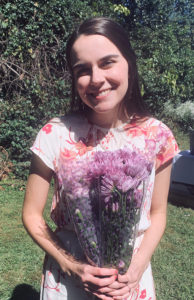 Q: Where did you find your inspiration for the characters in ‘Grass Stains’?

A: Several of my main characters were originally modeled after characters in other movies and books. However, after living in my mind for five years, they have drastically changed and taken on personalities of their own. Strange as it sounds, they sometimes even take me by surprise!

I realized a year or two ago that each of my characters is essentially an extension of me. This makes sense, of course—they would by nature have an Emily flavor, since I am the one who designed them. However, it was very revealing to recognize this because I could see both positive and negative elements of myself in each character. I was there in the very best characters, but I was also there in the very worst.

I wrote ‘Grass Stains’ in first person from the perspective of a teenage girl named Isabella. Since I was around Isabella’s age the entire time I wrote the book (give or take a few years), she is the most direct reflection of me. I poured so much of myself into that character, and I didn’t even realize I was doing it. At some point, Isabella started driving me crazy. That’s when I realized it was because she was making the same dumb decisions I would make in the same situations, and I was frustrated because I could relate to her so well. I definitely had a love-hate relationship with Isabella!

The male characters in ‘Grass Stains’ were initially based off my teenage celebrity crushes. As I grew up, they started to take on more similarities to my real-life crush, Caleb—who is now my husband! They are not direct parallels to him, but I tried to incorporate some of his sweet, humble personality into each of the male protagonists.

Something else I realized as I was working on ‘Grass Stains’ is that well-written characters can never be all good or all bad. One of my protagonists was essentially perfect in my first draft. There was literally not a single character flaw in him/her. When I changed this, that character became far more relatable, and the entire story was more complex and realistic.

In the same way, the villains were originally purely evil. Even though I made a point not to glorify their foolish and sinful decisions, I did try to rewrite them in such a way that readers could sympathize with them. Interestingly, I have received mixed reviews on one of my antagonists. Some people absolutely loathe this person and find no redeeming factors. Others pity him/her and make excuses for his/her (in my opinion) inexcusable behavior. This is the kind of tension I was going for.

Q: How did your education at LBC | Capital play a role in your debut novel?

A: Lancaster Bible College influenced ‘Grass Stains’ in so many ways!

To begin with, I do not think I would ever have had the courage to publish the book without Dr. Freeman. I did not work on the book very much for my first few semesters of college. In fact, I was starting to get tired of it. I had realized how vulnerable it is to write and publish a novel, and I lost my nerve to put my work out there for the public. After all, every single word in that 488-page novel was written by me—and that is a terrifying thought! I thought that I should shelve ‘Grass Stains’ and get started on bigger and better things. However, Dr. Freeman told me that unless I finished the project I started, I would never be successful in my next venture. This made sense to me—and now, looking back, it is absolutely true! Now that my parents, brothers, friends, professors, peers and husband have read my writing, I am far less scared to work on my next project. I’ve gotten both positive and negative feedback, which has helped me to prepare for novel No. 2.

Additionally, LBC | Capital helped me to develop a biblical perspective about my writing. I have always desperately wanted to honor God in my writing. After all, I was using a gift He had given me, and I wanted Him to receive the glory for that, not me! But for a long time, I felt that if I wrote a book that did not have explicit references to the gospel, it could not honor God.

This is not true! I am still working on thinking through what it means to glorify God in novel-writing, but one way that I know I can do that is by carefully guarding the content in my stories. As I mentioned before, I did not want excessive violence or sexuality in ‘Grass Stains.’ It was actually quite difficult to avoid these pitfalls sometimes, particularly the second one. There were times when I thought of including something that bordered on immorality or that could have caused readers to vicariously delight in a character’s moral failure. It was so hard to say no to content like this. But I had to remind myself that my goal was to please the Lord, not my readers or myself. So I left out some ideas that could have made the story more exciting, but not necessarily in a God-honoring way.

I’ve also learned that since God has given us gifts and talents, He wants us to use them. This may seem obvious, but it was really a profound thing to realize. If I had just hidden away my love for writing and suppressed the stories that invade my mind 24/7, this would not have glorified God. I may not always know how to glorify God through my novels, but I do know that it is not by refraining from writing. God is gracious, and He knows that in my heart, I do want to please Him through my work. As I pray and seek to do this, He will grant me the wisdom to know what it looks like practically. 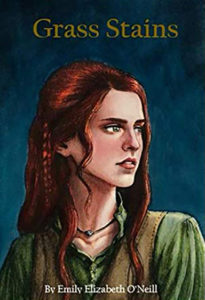 Q: How can people read or purchase the book?

A: ‘Grass Stains’ is available in paperback for $12 on Amazon.com

Q: What are your future plans after LBC | Capital? Are more novels on the horizon?

A: Now that I have finished at LBC | Capital, I am working as a book editor. I will also soon be starting as a writing coach for an online homeschool writing curriculum called Write from the Heart. Additionally, I just got married [in December 2020]!

I actually started my next novel [soon after my LBC | Capital graduation]! It is very exciting to be at the beginning of this process again. There is so much work to do, but so many possibilities and directions I could go. I can’t wait to bring a new set of characters to life, and I look forward to honoring God by using the creative abilities He has given me for His glory!

Q: Have any other students written novels while at LBC | Capital or is Emily the first?

A: CMA has traditionally attracted highly talented writers and creative students. Emily’s is not the first book to come out of the Communication senior project. A couple others who come to mind are Emily (Barto ’13) Marcum, who traveled to Spain to interview a series of church plant teams about their experiences and compiled those stories into a book for a non-profit in Washington State to use in its fundraising efforts. Michael Hill (’19 & ’20) compiled a lifetime of his grandfather’s notes into a Bible reference guide. Emma Lown (’20) is completing her final edits on the curriculum and a leader guide for a women’s bible study targeted toward college-age women. The talent, creativity and passion our students exhibit never ceases to amaze me. I am extremely proud of the work that they put out into the world.

Q: How does LBC | Capital’s Communication major prepare students like Emily to make their mark in the field?

Next, students are given practical hands-on experience through our many media outlets at LBC | Capital. Whether it is though our radio station, the video production studio, our in-house student marketing team or one of our publications like the newspaper, the fine arts magazine or the yearbook, students work side by side with upperclassmen to produce real work with real audiences, from their very first semester.

Finally, through competitive internships, student media leadership opportunities and their senior project, students get to demonstrate their proficiency and develop their talents under the watchful eyes of communication professionals and faculty mentors. It is an approach that has worked for LBC for over a decade and continues to produce students that are in high demand upon graduation.

What can you do with a major within Communication & Media Arts at LBC | Capital? The possibilities are endless!