‘Beyond the Role, it’s the Place’—Get to Know LBC’s Athletic Director

(This article was written as part of LBC | Capital’s News Writing course within the Communication & Media Arts Department. LBC | Capital President Thomas L. Kiedis announced that Rod Baughman, who had served as Interim Director of Athletics since April 2021 was named Director of Athletics effective Jan. 1, 2022. Baughman assumed the role from Pete Beers, who has been named Vice President for Traditional Undergraduate Education.) 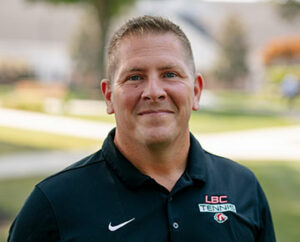 A locker sits in Rod Baughman’s office. It is familiar to anyone who has played sports or been in a locker room at any point in their life. The wooden structure houses a variety of memorabilia from both past and present, reminding the new Lancaster Bible College Director of Athletics about how his future goals are impacted by his long journey.

“I think there is always a reset when you move from one role to another,” stated Baughman. “As I worked more closely with student-athletes directly, I now I get the opportunity to mentor staff and foster culture within our athletic department.”

Baughman began his journey at LBC in the mid-1990s as a basketball coach and admissions counselor. Not long after taking on those roles, he left to pursue other ventures, both as a middle school teacher at Conestoga Christian School and eventually spent 19 years at Meadowbrook Christian School in Milton, Pa.  At MCS he served 8 of those years as Director of Student Services and Athletics, before spending the last 11 as Head of School. After this period, Baughman returned to LBC after hearing God’s calling, becoming an Assistant Athletic Director for Mentorship and Discipleship before taking on the role of Interim Athletic Director.

“I think you can be an Athletic Director [in] a lot of different places,” Baughman said. “Every place, though, is unique and special. The experience of LBC and what it stands for is why I wanted to do this here.”

Students have already felt Baughman’s impact throughout the LBC community as he has fulfilled the roles of Assistant Women’s Basketball Coach and Head Tennis Coach for the Chargers. Students and athletes understand what made “Coach Baughman” perfect for the position. “Rod has challenged me to think about how we can be an example of Christ in competition,” said tennis player Devon Clemmer (’23). “It has made me think deeper in my faith on different ways to witness to others.”

Baughman, however, is not ready to take all the credit for himself. He quickly acknowledged the woman who helped him get here and with whom he gets to do ministry daily—his wife, Melissa, who serves as LBC’s Men’s and Women’s Track & Field Coach.

“She’s been such a great life partner,” Baughman said. “She’s super talented, super smart. So often, I run things by her, and in most instances, if I’m doing what she’s saying, I’m making the right decision.”

Through everything, Baughman acknowledges the God that got him to where he is today. In this role, Baughman mentors other faculty members and coaches who help guide LBC’s student- athletes. Baughman hopes he can also serve as a resource for many other coaches and people, as he remains excited at the prospect of watching those he works with grow both in their professional and personal lives as well as in their faith.

Get to know the Chargers!