by Karyl Carmignani for LNP | LancasterOnline 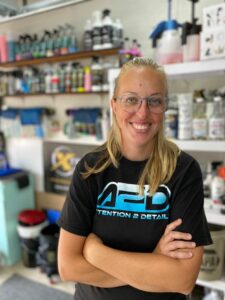 Longabaugh owns Attention 2 Details, a car-detailing business she operates out of her East Hempfield Township garage.

The automotive industry has long been dominated by men. In 2019, women represented just 9.9% of automotive repair and maintenance employees, according to Catalyst, a nonprofit that aims to make workplaces more equitable.

But for Longabaugh, her career path has been about more than just closing that gender gap. It’s been a lifelong interest.

“I have always had a passion for cars,” Longabaugh says.

Growing up in Florida, one of her chores was to wash her parents’ cars. She says it was relaxing washing cars out in nature, especially as a gentle rain fell.

“My dad was a car guy and taught me to ‘get down and look up’ ” while working on cars, she says.

She enjoyed the chore so much, it became a hobby. Longabaugh started detailing cars when she was 15.

She moved north to attend Lancaster Bible College. Working as a bank teller after graduation, a friend set her up with on a blind date with a man who would become her husband.

Her husband, Dave, also appreciates cars and he taught her how to polish. They bought a “starter house” one street over from her current home. Two children later, she knew she wanted to work from home and help support her family. Four years ago, a neighbor suggested she post her auto detailing skills on Nextdoor.

“Now I have loyal and new customers,” she says. And she is booked six weeks out.

While COVID-19 decimated many businesses, Longabaugh’s was considered an essential service. As a solo employee working from her home cleaning and sanitizing vehicles, she was able to adhere to protocols and have contactless service when necessary. She says larger detail businesses with multiple employees were not able to stay open, and she counts herself fortunate in her “unique business format.”

“It was my busiest year yet, as many people, including medical personnel, wanted their cars deep cleaned,” she says.

Given the demand and health concerns, she made a YouTube video on the best way to disinfect a vehicle. She says that it’s still “hard to realize that I’m helping people around the world with their detailing techniques.”

She started making videos “to simplify detailing for the beginner and share my perspective as a mom who details,” she says.

Longabaugh is considered an influencer on YouTube, with over 11,000 followers. Companies send her products to test and review.

“I’m not sponsored by anybody,” she says, so her reviews are “authentic and not paid for.”

And she makes one thing clear: Her videos aren’t meant to be as polished as the cars she works on.

“I do it all on my phone — recording, editing and uploading.” She says she likes the “homemade feel” of her videos, and that “they are not over-produced.”

She works out of her well-organized, two-car garage three days per week, usually knocking out one vehicle a day.

There is more to auto detailing than meets the eye. The act of spraying, polishing, clay barring and coating can be therapeutic — and the end result is gratifying for Longabaugh. She has a passion for the science behind it, as well.

“Unseen things are covering your car,” she says.

The major culprit, called rail dust — metal contaminants that land on a car and damage the paint — can be removed with a clay bar, then coated with a sealant, which will prolong the life of a car’s paint.

Longabaugh says car detailing requires “basic chemistry” knowledge so you are aware of how certain chemicals affect a vehicle. She had to educate herself not only to protect herself while using different products, but to get the best outcome on the car she’s working on. The pH levels in water and soap matter. She explained how car washes are convenient, but not always the best for the paint job. The car may get scratched, and if the pH level is not neutral, it can degrade the car’s finish.

Auto detailing is a luxury service, but Longabaugh says it is a great way to protect your vehicle.

“It’s not just for car show folks, it’s for everyday people,” she says. “We’re preserving the integrity of the vehicle — and your investment.”

She says she doesn’t do a whole lot of exotic cars and most of her customers “have average income and busy lives, and don’t want their vehicles to deteriorate.”

She says she likes helping daily drivers maintain their vehicles, and her regulars appreciate her work. She is generous with her knowledge about “the basics of car care” — especially with paint, finishes and sealants and the best way to maintain them.

Attention 2 Details’ offerings include clay bar treatments to sealants, ceramic coatings and tires dressings. They can take a couple of hours to a couple of days to complete. Some options sound like they are taken from a spa’s menu rather than an auto detailer.

“A car has pores,” Longabaugh says. “We are reconditioning your paint — you want polishing oils” to maintain the paint’s luster. “Coating needs a proper prep, and that’s really what makes the paint last.”

There are many detailing businesses around Lancaster, including mobile outfits, home-based operations, and storefront shops. Longabaugh likes working from home and being around for her kids.

For most of her clients, it can take 5 to 7 hours to wash, decontaminate, polish and ceramic coat a vehicle; and around 2 hours for a wash, clay bar and seal. An interior detail takes 3 to 4 hours.

“Detailing is a very involved process where customers’ vehicles get my full attention, and I strive to get their vehicle as close to new as possible, if not better,” she says.

Because the process is so involved, Longabaugh has to limit how many customers she takes per day. That also helps her keep her work-life balance in check.

“I have to pump the brakes on the business sometimes to keep my family first,” Longabaugh says. She adheres to wisdom gleaned early on: Run your business, don’t let your business run you. That said, with both her kids starting school for full days this fall, she says she will be able to devote more time to her business, which her clients will appreciate.

“Sometimes people call wanting their vehicle done that day, and I have to explain that I’m booked up weeks out,” Longabaugh says.

Her daughter Mackenzie is already eager to follow in her mother’s footsteps with auto detailing. But Longabaugh told her, “You have to learn to clean your closet first.”

Despite her expertise, Longabaugh says there are still occasional reminders that she is working in a male-dominated field.

“People still don’t expect a female to know what I know or do what I do,” Longabaugh says. “I never want to play the gender card. It shouldn’t matter if you’re a man or woman — you just need a passion for it.”