The sky may have been gray, but nothing could dampen the spirits of the Class of 2020, their families and friends during a unique drive-in graduation ceremony held on the Lancaster campus of Lancaster Bible College | Capital Seminary & Graduate School on Saturday, Sept. 26, 2020.

Originally set for May, the ceremony had been postponed due to COVID-19, making the long-awaited time to celebrate graduates’ accomplishments all the more special. View the entire commencement ceremony here. 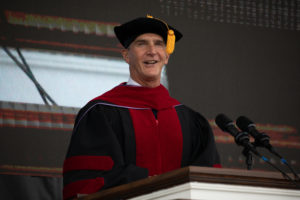 “To say that our Class of 2020’s final days at LBC | Capital did not go as planned would be an understatement,” wrote LBC | Capital President Dr. Thomas L. Kiedis for the 2020 commencement program. “Cross-cultural experiences were cancelled, athletic seasons cut short, events dropped off the calendar, interactions with professors and classmates moved to Zoom, and final memories on campus came to an abrupt end. And yet, they pressed on.

“Today, we celebrate these graduates and all they have accomplished,” he added. “We celebrate the friendships that have been formed, skills that have been developed and life transformation that has occurred. We celebrate God’s faithful work in their lives, equipping them for good works and conforming them to the image of His Son. Knowing that God truly is the same yesterday, today, and forever, we send them on the next phase of their journey in full confidence.” 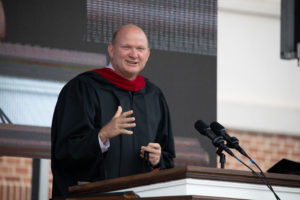 To open the 11 a.m. ceremony, Timothy J. Lease, Ph.D. graduate, provided an invocation. President Kiedis provided welcoming remarks and introduced the day’s speaker, Joshua Beers, who spoke on “Making Your Mist Count,” based on James 4:13-17 and providing 30 precepts by which to live.

Beers is the President of OneLife, a nine-month Christian gap-year program for high school graduates. Prior to his appointment, he served LBC | Capital from 2006-2020 in the roles of Vice President of Student Services, Vice President of Enrollment Management and Senior Vice President of Student Experience. Beers combined his love for sports and students by leading the men’s soccer team as head coach for three years and was named two-time NCCAA East Region Coach of the Year. He is known for his heart for students—discipling, advocating, praying and laughing with them. 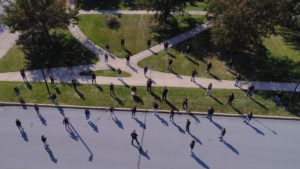 The LBC Chorale, directed by Dr. Robert Bigley, next provided special music, a selection titled “Baba Yetu,” translated as “Our Father” in Swahili, by Christopher Tin.

Provost Tricia Wilson presented the candidates for graduation, as Dr. Kiedis conferred the degrees, read one by one by Registrar Katie Judy. Each graduate greeted college leaders, received red leather diploma covers and the LBC | Capital tradition of a servant’s towel from President Emeritus and LBC | Capital Ambassador Dr. Peter W. Teague, plus an extra treat of a cupcake, handed out by Executive Vice President Dr. Lee DeRemer. 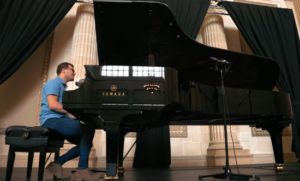 To close out the special time together, a recording of an original arrangement of the college hymn, “My Hope Is in the Lord,” was performed by Jacob Huber (’20). Watch and listen here.

Vice President of Institutional Alignment Rev. Zachary Ritvalsky offered the benediction, after which graduates were encouraged to exit their vehicles and celebrate together with a confetti popper.

Throughout the commencement ceremony, several students were honored with awards, which were delivered directly to vehicles by faculty and staff. Class of 2020 award recipients include the following:

Red, white and blue cords were worn by graduates who are veterans or active-duty members of the United States Armed Forces in recognition of their sacrificial service.

Student Leadership Awards: Plaques to the male and female graduates who manifested excellence in the area of student leadership evidenced by scholarship, extracurricular involvement and service to the college community—Stephanie Ehko-Brussel, Dominic Matranga

Theology Award: A book provided by the Baker Book House to the graduates with the highest grade point average in theology—Madalyn Braun, Joshua Marcroft

Biblical Languages Award: A cash award provided by Timothy D. George to the graduate in Pastoral Studies who has the highest grade point average in Greek—Benjamin Herb

Sigma Beta Delta: This honor society for students in business, management and administration serves institutions that offer baccalaureate and graduate degrees in business, management and administration where the institution holds accreditation from one of the six regional accrediting bodies but not specialized accreditation in business—Ashley Barr, Katie Fleming, Caitlin Hickey, Colin McCabe, Estiven Saldarriaga

Homiletics Award: A cash award provided by the Shepherd’s Staff to the graduate who has demonstrated excellence in the art of preaching—Tirus Twyne

Missio Dei (Mission of God) Award: A cash award to the graduate who has committed to serve God as a missionary and who has demonstrated a love for God and a love for people through prayer, evangelism and involvement in ministry while at LBC | Capital—Madalyn Braun

Servant Leader Award: A cash award to a male and female students who, throughout their academic study, ministry service and Christ-like character, have clearly demonstrated a love for God and others throughout their time at LBC | Capital—Anneke Vosburgh, Jonathan Woodin

Communication Excellence Award: A cash award to the graduating student who has best exemplified the values of LBC | Capital by integrating a biblical worldview through the application of ethical principles and professional standards within the communication community (minimum cumulative GPA of 3.25)—Sean Graybill

The John Pugh Honorary Award for Excellence in Counseling: A cash award to the undergraduate student who has completed 30 credits and who exemplifies the qualities of a strong commitment to integration of their faith with professional practice in counseling (minimum cumulative GPA of 3.25)—Lea Formica

The Professional Counselor Award: A cash award given to the five-year accelerated program counseling student who has completed a minimum of 55 credits in counseling and demonstrates a Christ-like character of love for people and a passion for helping those in need as evidenced by community engagement and service to others—Michaela Landis

Literacy Keys Award: A cash award and a one-year membership to the International Reading Association for the graduate who has shown knowledge, enthusiasm and a repertoire of literature and skills to help the learner unlock the written word—Kaitlyn Aston

McIllwaine Science Award: A cash award and a plaque to the graduate who has demonstrated a biblical commitment and outstanding achievement in the sciences, science education and student teaching in the sciences. The student must be enrolled in the Teacher Education Program with a minimum of 125 hours of study—Stephanie Ehko Brusse

The Master Teacher Award: A book and cash award presented by the Teacher Education Department to the graduating teacher education student who exemplifies the characteristics of the Master Teacher—Lydia Dice

Excellence Award: A membership subscription to the AAHPERD or NASSM Magazine to the student who represents exemplary and innovative achievement as inspired by the life, career and character of John Wooden—Austen Smith

Faculty Award: A cash award to the senior who exemplifies biblical standards of worship in his/her personal and professional life, effectively engaging the world through the use of his/her individual art form—Samantha Ingram

Ally Center Scholar Award: A cash award to the graduate who has evidenced outstanding academic, spiritual and social progress—Sharlie Taylor

Seminary Education and Servant Leadership Award: A cash award to the seminary master’s degree graduate who has evidenced the traits of being a reflective practitioner, having a servant’s heart and displaying exceptional leadership for global kingdom impact—Richard Sparling

Joshua 1:9 Award: A cash award to the graduate who has shown great strength and courage in the midst of difficult circumstances in pursuit of his or her college education (minimum GPA of 2.5)—Jeremy Snader

Valedictorian: A cash award to the graduate with the highest grade point average (bachelor’s degree student with a minimum of 75 hours completed at Lancaster Bible College)—Sean Graybill 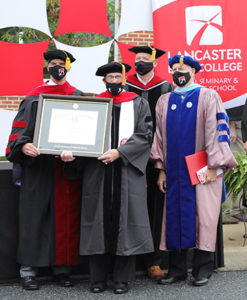 One graduate who celebrated his Ph.D. in Biblical Studies at LBC | Capital’s graduation ceremony has an amazing story of coming full circle.

Tim Lease is the son of Lancaster Bible College’s third President, Dr. Stuart Lease. Tim had walked away from God, but at his father’s funeral, he met then-LBC | Capital President Dr. Peter W. Teague, who reached out to Tim, began meeting with him regularly and, over time, had the joy of seeing him come back into fellowship with the Lord.

Dr. Teague also experienced joy in officiating Tim’s marriage to his wife, Bridget, on the Lancaster Bible College campus. Since then, Tim earned his Master of Arts in Biblical Studies in 2015 and has served the college as an Adjunct Professor in the Bible & Theology Department.

According to sentiments read during his hooding ceremony, “Tim would like to thank President Emeritus Dr. Peter W. Teague for his ongoing friendship and support, as well as Dr. Mark Meyer, whose mentorship and guidance have paved the path of learning. Dr. Doug Finkbeiner has also served an important role during this time. Tim has been blessed to have experienced the profound work of his Lord Jesus Christ, the ‘Miracle Counselor,’ in the transformation his life. He looks forward to sharing that message of hope with others through ministry and testimony. …Having grown up on the LBC campus as a child, Tim wishes to exhibit the same passion and desire to share Christ with young people that he first witnessed in his father and that was modeled by those under whom he has studied.”

Last year, Tim successfully defended his Ph.D. dissertation, “The Messianic Expectation of the פֶּ֠לֶא יוֹעֵץ֙ in Isaiah 9:5 as Fulfilled in the Ministry of Jesus of Nazareth.” 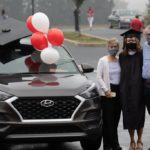 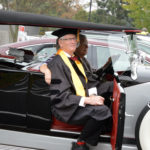 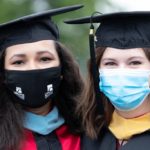 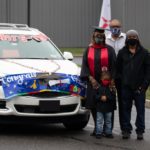 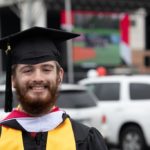 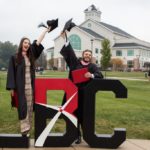 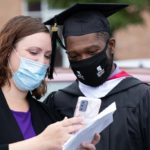 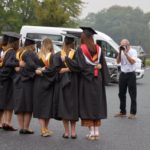 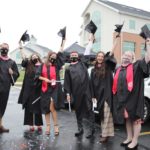 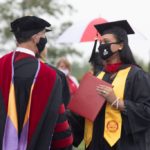 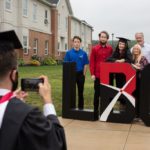 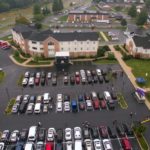