The April 2021 installment of “The Way It Was” takes us back to the late 1980s, as LBC | Capital was growing and full of life. There was construction around the college as well as fun times on and off campus. Through it all, there was a love of the Lord, a desire to grow spiritually and service to one another.

This month’s look back features the years 1985-1989, as Dr. Gilbert Peterson was in the heart of his 20-year run as LBC | Capital President. Construction on the Sebastian Academic Center was in full swing during the 1988-89 academic year, and campus events like the pig roast and Homecoming were celebrated with great enthusiasm.

The LBC | Capital Athletic Department saw growth in the mid- to late-1980s, as women’s volleyball was added to the catalog of sports. The team was terrific right away, as the Chargers won the 1987 NCCAA East Region Championship in just its second season. In addition to the women’s volleyball team, men’s basketball player David Green played during the 1986-87 and 87-88 seasons and put together two of the finest years in program history. The London sisters, Jill and Jodi, were also on campus during the late 1980s, and each scored over 1,000 points during their basketball careers.

All four yearbooks during this time were put together terrifically. One of the photos in this month’s gallery features the 1986 Ichthus staff, and it is evident in each of the yearbooks that there was significant care and thought put into the creations.

Enhanced technologies also came to LBC | Capital throughout the 1980s, and another one of the photos in this month’s gallery features two students playing a computer game in the small computer lab that was set up in the old library.

This month’s “Tales from Eden Road & Beyond” podcast features current LBC | Capital President Dr. Thomas L. Kiedis. Dr. Kiedis recaps his first 15 months as president and talks about the love he has for the Lancaster campus as well as its students, staff and faculty.

Listen to the podcast here 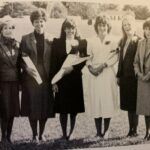 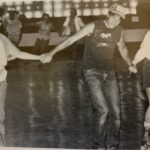 Students from LBC held a “beach party” at a local roller skating rink during the 1985-86 academic year. 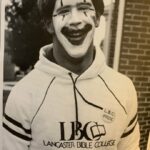 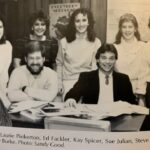 The 1986 Ichthus Staff is pictured, as this group put together one of the finer yearbooks in LBC history. The 1986 yearbook is stuffed with information, tremendous photos and truly captures what life was like on the campus of Lancaster Bible College. 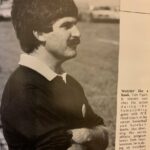 Tom Figart is pictured coaching the men’s soccer team during the 1986 season. Figart is a giant in the history of LBC and coached many teams throughout his tenure. He also served as Athletic Director for several years. 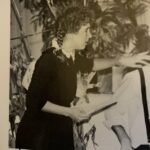 Sharon Hershey and Duane Evans appeared in “A Midsummer Night’s Dream,” which was performed on campus during the 1986-87 school year. 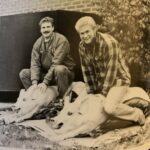 Bruce Kumher (right) and Lance Loken got the pigs ready for the annual pig roast during the 1986-87 school year. 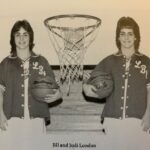 Jill and Jodi London were two of most prolific women’s basketball players to ever play at Lancaster Bible. Jill London is still ranked fifth all-time on the program’s scoring list, as she completed her four-year career with 1,383 points. Jodi London also scored over 1,000 points during her career, pouring in 1,043. 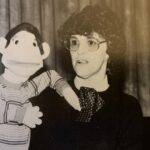 Dr. Penny Clawson was a terrific professor in the Education Department for many years at LBC. In this photo from the 1986-87 academic year, she is answering a question while providing a lesson using a puppet. 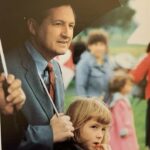 The 1988 yearbook was dedicated to Dr. Ray Naugle. Here he is at Homecoming in 1987 with his daughter, Julia. Dr. Julia Hershey is now Chair of the Education Department at Lancaster Bible College. 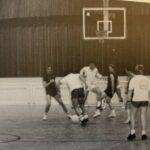 Indoor soccer grew in popularity during the 1980s, and Lancaster Bible College was no exception to the growth, as several students played in the Horst Athletic Center. 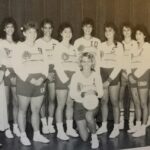 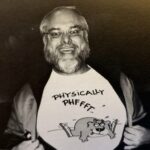 Lancaster Bible College President Dr. Gilbert Peterson shows off a great shirt at one of the LBC basketball games during the 1987-88 academic year. 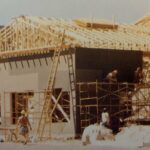 The Sebastian Academic Center was under construction during the 1988-89 academic year. 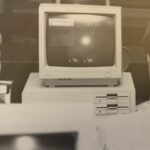 Two LBC students play a computer game in the computer lab during the 1988-89 academic year. Anyone have a floppy disk?