The Way It Was | The Turn of the Century and Millennium 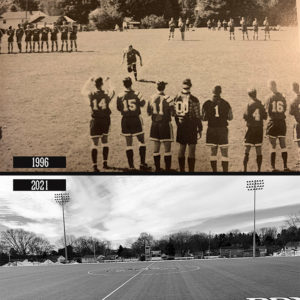 This month’s now and then photo features a spot on campus that has changed drastically. The 1996 men’s soccer team played on a grass field with little around it, while today’s soccer teams, as well as the field hockey and women’s lacrosse teams, play on the state-of-the-art turf at Donald H. Funk Field. A stadium with seating will be under construction at the site beginning in mid-March.

The February 2021 installment of “The Way It Was” takes us back to the turn of the century and millennium, as LBC | Capital went through several changes from 1997 to 2001. From a presidential change to a brand new chapel on campus, the students, faculty and staff entered the information age with a flurry of activity.

LBC | Capital’s fourth president, Dr. Gilbert A. Peterson, had served the college since 1979 and in 1999 turned the reigns of the college over to Dr. Peter W. Teague. Dr. Teague would eventually serve 21 years in the role of president, as he and Dr. Peterson helped guide the college for over 41 years. Dr. Teague helped lead the college in the completion of several buildings on campus and was also at the helm as LBC | Capital began offering a litany of classes online.

Dr. Peterson had been influential in bringing the campus into financial security at the beginning of his term in the early 1980s, and also expanded the campus to 100 acres during his time as president.

As the millennium turned from 1999 to 2000, LBC | Capital continued to expand its influence in the community and the world with a renewed focus on academics, athletics and spiritual growth on campus.

This month’s episode of our “Tales from Eden Road & Beyond” podcast features an interview with Dr. Peter W. Teague, as he recounts the early years of his tenure as president and discusses the impact LBC | Capital has had here in Lancaster, as well as the college’s sites in Philadelphia, Washington, D.C., and more. The podcast can be found on Apple Podcasts, Spotify and at this link.

1. Dr. Teague Presidency Begins: On Nov. 20, 1999, Dr. Peter W. Teague was inaugurated as the fifth President of Lancaster Bible College. Dr. Teague had assumed the duties of the president on July 1, 1999, but shared his special day with many guests and family members a few months later. The 2000 yearbook remarked about Dr. Teague, “Students appreciate the interest that has been shown by President Teague in student activities and his willingness to get to know each person. The awareness stems from the admirable quality that Dr. Teague has displayed, not only at home, but also at work—a servant’s heart.”

2. Good Shepherd Chapel Completed: The Good Shepherd Chapel was completed in 2001, as the campus celebrated having a space to worship and gather together for chapels, music performances and much more. Prior to the chapel being fully completed, students and staff joined together during the fall semester (Fall 2000) and braved the cold, while worshipping together in the new chapel.

3. Improvements in Technology: There were large technological changes in the world during the years of 1997-2001, and those changes were evident on the campus of LBC | Capital as well, as email began to be used more throughout the campus and in everyday life. Improvements in the library included moving library resources online.

5. 2001 Graduation: The Class of 2001 was the first class to celebrate graduation in Good Shepherd Chapel, which was completed just a few weeks prior to commencement. 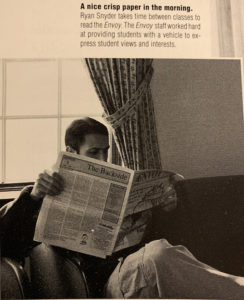 In 1999, Ryan Snyder reads a copy of the Envoy, the name of the student newspaper on campus at that time. 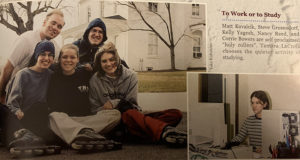 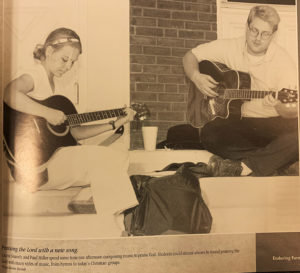 Two students, Laurie Snavely and Paul Miller, play their guitars outside of their dormitory in 1999. 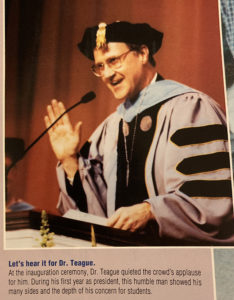 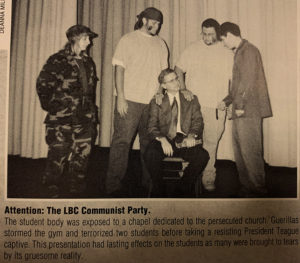 This photo features Dr. Teague in a chapel where he was “kidnapped” by guerillas who were portraying how the church is persecuted around the world. The yearbook says the chapel service left a lasting impression on many students. Dr. Teague discusses this chapel in our “Tales from Eden Road & Beyond” podcast, which is linked in this article. 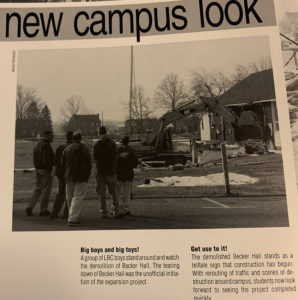 A group of students watches the demolition of Becker Hall, which was torn down to make room for Good Shepherd Chapel. 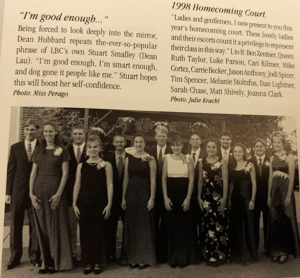 This picture features the 1998 Homecoming Court; Ruth Taylor (second from the left) was named Homecoming Queen. 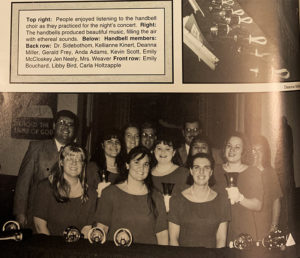 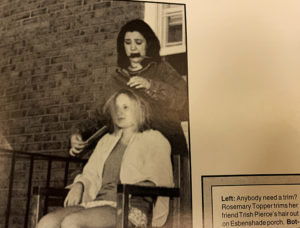 Rosemary Topper cuts Trish Pierce’s hair on the porch of Esbenshade Hall, which at the time was a dormitory on campus. Esbenshade has since been transformed into offices for staff at Lancaster Bible College | Capital Seminary & Graduate School. 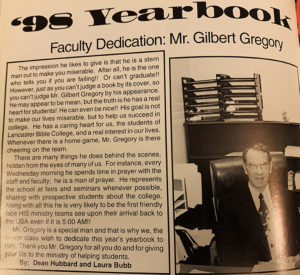 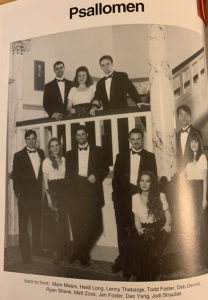 The Psallomen prior to a performance in 1997. Ryan Shenk (’97, standing on floor, middle) is currently a professor in the Music, Worship & Performing Arts Department. 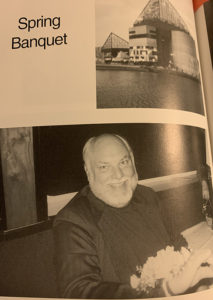 The 1997 Spring Banquet was held at Baltimore Harbor, and then-President Dr. Gilbert Peterson is seen here enjoying the evening. 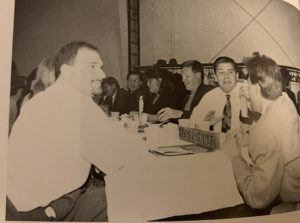 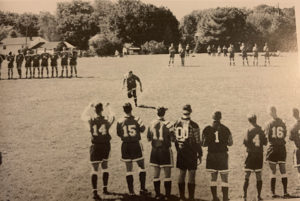 The Chargers were fired up to begin this men’s soccer contest during the 1996 season.

This month’s now and then photo features a spot on campus that has changed drastically. The 1996 men’s soccer team played on a grass field with little around it, while today’s soccer teams, as well as the field hockey and women’s lacrosse teams, play on the state-of-the-art turf at Donald H. Funk Field. A stadium with seating will be under construction at the site beginning in mid-March.

Keep in touch with LBC | Capital!