For the March 2021 installment of “The Way It Was,” we are headed back to the 1970s, as LBC | Capital was again full of changes and school spirit throughout the early part of the disco decade. Our look at the years 1972-1976 reveals a vibrant campus full of life and dedication to the Lord.

LBC was led by its third president, Dr. Stuart Lease, throughout the early 1970s, and he was instrumental in Lancaster School of the Bible becoming Lancaster Bible College in January 1973. The institution began awarding four-year degrees the following academic year, and Dr. Lease’s note to the students in the 1974 yearbook can be found below in our photo gallery for this month.

In addition to a new name, the college also built several buildings during this time, including Hitchcock Hall (pictured below) and what is now the Horst Athletic Center, which is featured in our March “Now & Then” photo.

The campus was full of American pride during the 1975-76 academic year, as the campus featured tributes to America’s 200th birthday all year long. The 1976 yearbook features several photos depicting American heritage and history, and the campus parade around Homecoming that year displayed several patriotic floats.

Both “Tales from Eden Road & Beyond” podcasts this month feature gentlemen who were in and around campus during the early- to mid-1970s. Dr. Harold Kime (’70) and Dr. Gordon Gregory (’82) joined us to discuss their time on campus as students and professors, as did Dr. Jim Ayers (’80), who talked about his student years and long career at the institution as a professor. The podcasts can be found at the link below, and also on Spotify and Apple Podcasts. 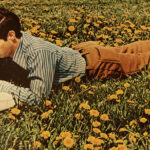 A student reads his Bible among the dandelions on campus during the 1972-73 academic year. 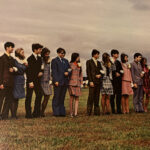 The 1972 Homecoming Court is pictured on an overcast, breezy fall day. Sandy Love was named Homecoming Queen during the weekend festivities. 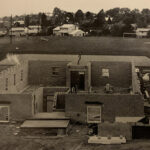 Hitchcock Hall was constructed during the 1974-75 school year and served as classroom space for over 35 years before being torn down prior to the construction of Teague Learning Commons in 2010. 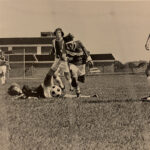 The 1972 soccer team plays on a field located next to the current student union building. 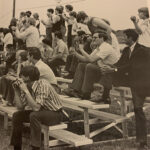 A crowd of fans cheers on the Chargers during a soccer game in 1973. The gentleman on the right of the photo with his hands around his knees is longtime employee Gilbert Gregory, and above him is his son, then-teenager Gordon Gregory—today Dr. Gordon Gregory of the Bible & Theology Department. 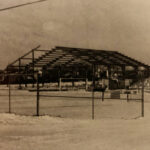 The Horst Athletic Center was built during the 1975-76 school year and still serves as home base for the Lancaster Bible College Athletic Department. 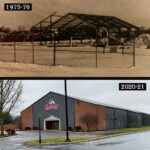 A look at the Horst Athletic Center 45 years apart! 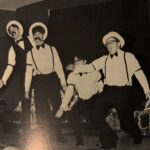 During the 1972-73 school year, LBC hosted a “Roaring 20’s” Night featuring a barbershop quartet, a trumpet player and more! 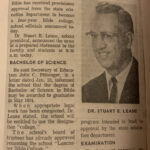 In January 1973, Lancaster Bible College received approval to become a four-year college. This photo shows the article written by the Lancaster New Era on Jan. 25, 1973. 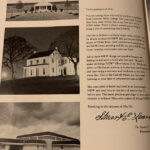 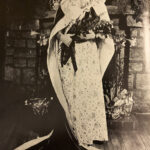 Per the 1975 yearbook, “Beauty, graciousness and a loving spirit are some of the characteristics of a queen. Miss Carol Palmateer qualified in these areas and was selected to be Lancaster Bible College’s Semiformal Queen.” 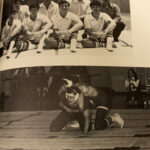 Lancaster Bible College featured a wrestling team during the 1970s.

In addition to our look back at LBC | Capital history, this month’s blog also has a new feature where we post a short Q&A session with an alumnus of the institution. Our first installment features a session with Ariella Hoover (’14), who currently serves as the Operations Manager of the Arts and Culture Series at Lancaster Bible College and The Trust Performing Arts Center. She recently served as Executive Producer of LBC | Capital’s performance of “Singin’ in the Rain.” 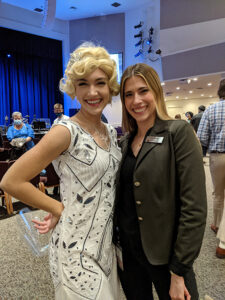 LBC | CAPITAL: What was it like to serve as Executive Producer of a college show at the college where you also performed.

ARIELLA HOOVER: It was wild. I had many moments during the show where I stopped and thought about how neat it was that I had performed in this exact same show 10 years ago as a freshman, and now I am in charge of the show. It was surreal and was very special. It was great to be involved in this way, and I just love the show and had so much fun.

LBC: Describe the level of talent of our current students in the Music, Worship & Performing Arts (MWPA) Department.

AH: A lot of our students in this program could make this (acting, performing, singing, etc.) a career. Even compared to 10 years ago, we had a lot of non-Worship & Performing Arts majors in the show, and now almost all are Music Theatre majors or involved with MWPA in some way. There is a lot of talent in the department, and this is a really exciting time to be in the department. Our students are getting a lot of good experience, not only on our campus with our productions, but off campus with professional theatres as well.

LBC: What are some of your fondest memories of attending Lancaster Bible College?

AH: Playing on the women’s lacrosse team was so much fun, as was being a fan at so many of our athletic events. Our spring formals were always fun, and I met a lot of great people and great friends during my time here. I enjoyed campus life so much.

LBC: In addition to performing on stage as a student, you also performed on the lacrosse field. What did you enjoy most about playing lacrosse? 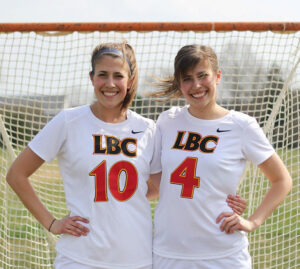 AH: I love the sport of lacrosse. I really hadn’t played too much prior to college, but I learned the sport, and it meant a lot to be a part of a team. I made so many great friends, especially Ky-Leigh (Hallman ’14) Leighty, and I loved having two hours a day at practices or games where I could leave everything behind and just play lacrosse.

LBC: You’ve been around Lancaster Bible College for nearly a decade now. What are the things you love about the campus, students, staff and faculty?

AH: The people here are wonderful. I love my co-workers, love working with Rob Bigley and Brianna Brady (in MWPA), and really do love that we get to study the Bible and train students to use it in their lives after graduating from Lancaster Bible College, whether it be in the workplace or simply in their day-to-day lives. I love helping students integrate their faith into the rest of their lives. The mentorship opportunities are immense, whether that is me doing the mentoring with students or me getting mentored by a colleague or friend on campus.

Hey, Alumni! Keep in touch with your alma mater!