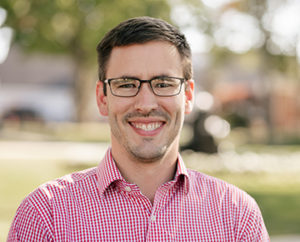 Shelly graduated from LBC | Capital with a degree in Health & Physical Education as well as Biblical Studies. During his time as a student, Shelly struggled to prioritize rest. He remembered feeling overwhelmed as a student and dreading participating in activities he would have otherwise enjoyed. He crashed emotionally and physically when his school semesters came to a close.

“I said yes to too many things and spread myself too thin … I always felt behind and stressed” Shelly says.

No longer a student but a member of the Student Affairs team at his alma mater, Shelly reflects on God’s original design for rest, why setting time aside to rest is so important and how choosing to rest is choosing to trust God.

“If God rested on the seventh day, we are to as well,” Shelly says. “If we don’t block out the space, it will always be encroached upon … if we don’t guard it very carefully, it will be taken every single time.”

Shelly explains that a biblical understanding of work and rest are critical. He points out that modern culture tends to view work as some form of evil to avoid. However, in the Bible, God worked when He made the universe in Genesis 1 and then rested after His work was complete. Work existed in the garden of Eden before the fall, Shelly points out.

“Being engaged in meaningful work is a blessing … both work and rest are gifts from God,” Shelly explains. “[When you] rest, you sit in the goodness of God so that you can get back to meaningful work and make an impact.”

Shelly describes how, in the Old Testament, the nation of Israel was governed by a rhythm of life that centered on the Lord their God. The people recited the Shema (Deuteronomy 6:4-9) as a prayer to the Lord daily. They followed the pattern God established in the creation account, working for six days and resting on the Sabbath. The nation of Israel followed a rhythm of going up to Jerusalem seasonally in which they paused their business and work to focus on the Lord, singing songs of ascent.

“When you pause for a day you are saying that you trust that God will provide. [You are saying] I don’t have to hustle and grind non-stop to provide for myself. God’s going to provide,” says Shelly.

Shelly points out that the decision to rest is choosing to trust God. However, the practice itself is difficult. Shelly suggests students to “practice faithfulness in small ways” by small steps such as taking an hour on a Sunday to rest, with the intention of becoming faithful in taking time to rest for an entire day.

“Rest is a sign of trust and dependence on God,” Shelly says. “It was meant to … remind us that we are limited. Rest forces us to say, ‘I can’t go nonstop,’ to say, ‘there’s a limited amount of time that I have—a limited amount of energy that I have.’ It’s a way of embracing our limitations and trusting, ultimately, that God is going to take care of [us].”

Shelly encourages students to live within the limitations that God has given them. To set aside specific times to rest as a choice to trust God and “[be] at a place of peace, knowing that the greatest work is done.”

Want to take the next step to commit to rest? Check out these 12 Scriptures provided by the Jesus Film Project.