(This story originally appeared on the LBC Blog in 2018.)

Tanya Cooper-Johnson (’17) is a woman of strength. She’s overcome a lot of obstacles in her life, and God has been with her every step of the way.

Among other things, Tanya is the mother of five children. But her youngest son, Andre’ Eugene Johnson Sr. was, in her own words, “the light of our lives.” Johnson described him as a real take-charge kind of kid. “He enjoyed telling his older siblings what to do,” she said slyly. A devoted believer, Tanya passed on her love of the Lord to her children. “Andre’ believed in God and was one of my first children to give his life to Christ at the age of 10,” she said. “He enjoyed attending church and participating in youth programs.”

Andre’ also loved to spend time with his family. When he became a father at the young age of 17, Tanya said he shouldered the responsibility well. “Andre’ Jr. was the most important thing in his life.” She affectionately described her son as “a momma’s boy,” and said, “He didn’t stray far from me or home.” 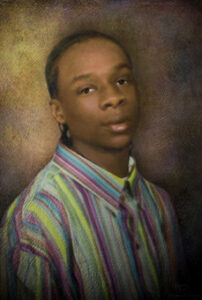 Then, in 2007, she got a phone call that changed everything. 18-year-old Andre’ had been shot in a senseless act of violence. Tragically, he passed away on Sept. 2. “He was just 20 days from his 19th birthday,” said Tanya.

While processing the unexpected and tragic loss of a loved one is never easy, Tanya looked to the Lord for strength – and her son’s own beliefs. “Andre’ believed that everyone deserved a second chance in life, and to see people for the good in them,” she explained. “He was big on forgiveness.”

During that difficult time, Tanya felt like she needed to do something. “What pushed me back to school was the burning desire to feel whole,” she explained. “After the loss of my son at the hands of another, I knew something was missing in my life.” So she prayed. “After prayer and spending time with God, I promised Him that I would live my life with purpose. My first task was to complete my college education.”

And she did. Tanya enrolled at the Washington, D.C. location of LBC | Capital and earned her undergraduate degree in Biblical Studies. She said the staff and faculty at LBC inspired her immensely and pushed her to excel. “My undergraduate advisor, Ms. Marteal Pitts, was the angel who came alongside me and encouraged me to soar,” she said. “If it had not been for Ms. Pitts’ words of wisdom, guidance and compassion for someone she didn’t know, I don’t think I would have soared the way I did. Because she took the time to listen to me and pour into my life, it made my stay at LBC so rewarding.”

Starting or completing a degree can be difficult, especially with demands in life, but Tanya was up for the challenge. “I kept going because I refused to give up or drop out of college again,” she said determinedly. “I made it by prayer, the Love of God, His Grace upon my life, Him leading my path and placing His shepherds along the way.”

While she was studying at LBC, God gave Tanya a vision for a ministry that would be the “first responders” for the families of homicide victims. So she founded the Weeping Mothers Inc. in 2016. “[There are 17] mothers on our advisory committee, all of whom have lost their children to street violence,” explained Tanya. “Ten of those homicides were in 2016. Currently, we meet twice a month for grief counseling, testimonials and more.” The organization reaches out to families of homicide victims in Annapolis City and surrounding communities and provides emotional and spiritual support for them. For Tanya, this ministry has helped her to heal and allows her to help others heal.

Today, Tanya has her bachelor’s degree and is going back for more. She’s enrolled in two graduate programs at LBC and is working toward earning a Master of Arts in Christian care and a Master of Divinity. She hopes to become a licensed chaplain in the near future. “When I look back at my first night of class and where I am today,” said Tanya, “I thank God for opening the doors of LBC and placing me where I needed to be to learn His word. I thank LBC and its staff for standing in the gap and guiding me on my journey to be educated in God’s word. Because of LBC, I’m inspired to go beyond the beyond!”