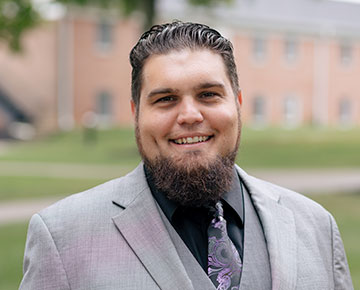 Baritone Jeffrey Martin, a native of Maryland, is a Doctoral Candidate at the University of Minnesota. A graduate of the Peabody Conservatory, Professor Martin’s Peabody career took flight as The Man with the Cornet Case/Puppet-master from Argento’s Postcard from Morocco, of which The Baltimore Sun said: “Jeffrey Martin brings solid tone and exemplary diction…” During his tenure in Baltimore, Professor Martin performed Leporello (Don Giovanni) in Peabody’s collaboration with Lyric Opera Baltimore on the Lyric Opera stage.

Recent concert performances include Mozart’s “Great” Mass in C Minor, Mozart’s Requiem Mass, Defiant Requiem: Verdi at Terezin and other guest soloist engagements with groups around the country. Internationally, Jeffrey was found performing the role of Raimondo (Lucia di Lammermoor) with La Musica Lirica Festival in Novafeltria, Italy. Performances with the University of Minnesota include Escamillo in the Peter Brooks adaptation of Bizet’s Carmen, the title role in Le nozze di Figaro and the role of Rev. Olin Blitch in Carlisle Floyd’s Susannah. Most recently, he sang the role of Jesus in a staged version of Bach’s St. Matthew Passion with the University of Minnesota in Collaboration with the Hochschule für Musik Detmold in Detmold, Germany.

“God made each of us uniquely. Training our voices is equally unique.” – Dr. Martin

“As iron sharpens iron, so one person sharpens another.” – Proverbs 27:17