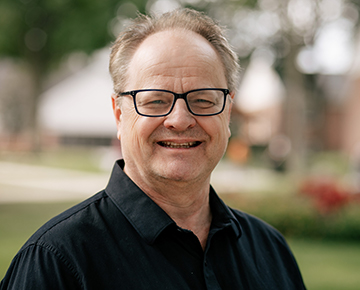 Dr. Thorlakson received his early music education and Associate Degree from the Royal Conservatory of Music in Toronto. He proceeded to graduate with a Bachelor of Music in Performance from the University of Toronto, a Master of Church Music and Doctor of Musical Arts from Southern Baptist Theological Seminary in Louisville, KY (where he received several distinctions including the Certificate in Performance and a Pedagogy award), and post-graduate studies at both Eastman School of Music in Rochester, NY and the University of Southern California in Los Angeles, CA.

Dr. Thorlakson has enjoyed a varied piano performance career as a recitalist, orchestra soloist, chamber musician and accompanist through North America in venues from conference centers to concert halls. He has continually served a number of churches in full and part time music ministry positions. Dr. Thorlakson is also a Senior Examiner for the Royal Conservatory of Music of Toronto and an actively sought adjudicator for festivals and competitions across the country.

His academic career has taken him from Simpson University in Redding, CA, to Redeemer University in Hamilton, Ontario, Canada, and finally to Lancaster Bible College. At each academic institution, in addition to his teaching load as a piano, theory and music ministry professor, he has served as the department chair and conductor of the college symphony orchestra.

“I think of faithful music making in much the same way as Eric Liddell felt about his athletic pursuits: ‘I believe God made me for a purpose, but he also made me fast, When I run I feel God’s pleasure.’ When I perform music to the Glory of God, I sense in His pleasure in the pursuit of artistic excellence.” — Dr. Thorlakson

“Let the word of Christ richly dwell within you, with all wisdom teaching and admonishing one another with psalms and hymns and spiritual songs, singing with thankfulness in your hearts.” – Colossians 3:16