In July 2019, a new academic department, Communication & Media Arts, was established at Lancaster Bible College | Capital Seminary & Graduate School. Through their coursework, students are trained for careers in broadcasting, journalism, advertising, public relations, digital marketing, production and graphic design, as they learn to work collaboratively and thrive alongside others through practical, real-world media opportunities across the campus, into the community and around the world.

Part of that experience is hearing from seasoned professionals in the field who can offer a unique perspective. Guest speakers began engaging with students last spring, and that has continued virtually during the fall 2020 semester. 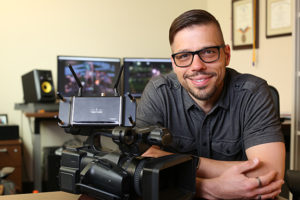 “The Communication & Media Arts Department was created as a result of putting students first,” said Ryan Geesaman, Department Chair and Director of the Live Production Program, at right. “By moving two related but separated programs under the same departmental umbrella, we have been able to both strengthen and expand the options for students today and in the future. Likewise, it is so valuable for our students to hear from professionals who are already living out their passions and talents within communication and media arts. These guest speakers bring another element to the classroom that gives students a glimpse into the many careers within this growing and ever-changing field.”

Already this fall, students have had the opportunity to hear from several professionals:

Also planned for this fall include the several relationship-building opportunities with guest speakers:

In the spring of 2020, Communication & Media Arts students also had unique opportunities to hear from these leaders in their fields.

Andrew Peterson, singer, songwriter and author, met with students in the Communication Vocation course. The author of “Adorning the Dark,” which was read as part of the curriculum, discussed calling, Christians in the arts and the importance of Christian community. He is a gifted storyteller and answered students’ questions with candor and compassion.

Mark MacDonald is communication pastor, speaker, consultant, best-selling author of “Be Known for Something,” church branding strategist for Generis and Executive Director of Center for Church Communication, empowering 10,000-plus churches to become relevant through their ministries, websites and social media. MacDonald discussed how churches can get past competing with each other and attract highly engaged congregants by deciding and communicating what they want to be known for in their community.

Jeff Noel, author, TED Talk speaker and 30-year Disney leader, is a two-time Walt Disney Lifetime Achievement Award recipient who taught customer service for 15 years through the Disney Institute. Noel talked with students about why it’s better to focus on going the extra inch versus going the extra mile and how that relates not only to customer service but also to achieving career success. He also helped students see how over-focusing on the things others under-focus on can create great experiences for audiences in both the business and ministry arenas.

Scott Ragsdale ran audio in one of the largest U.S. churches from 2001-2014 and now does 160 shows annually. He was able to give students a glimpse into running front-of-house audio at Willow Creek Community Church, in addition to his opportunity to mix a surprise, celebrity-flooded celebration for Oprah Winfrey. Ragsdale talked to students about managing different personalities in the live production field as well as his time on the road with Joe Banamassa.

Jeff Cranfill, lighting designer for Hootie and the Blowfish, NEEDTOBREATHE, Billy Graham, Joyce Meyer and many others, was invited to the Media Technician course by Byron Hamm as a way to enhance our remote learning since students last semester would typically be learning hands-on while producing chapel services each week. Cranfill also shared an amazing story about meeting Billy Graham.

Andy Meyer, audio engineer for Justin Timberlake, Bob Seger, Janet Jackson and many others, is well-respected in the live event world. Meyer spoke to Live Production majors about how to break into the live production industry and become an indispensable asset to a company, tour or artist.

Steve Taylor, musician, music producer and film writer/producer/director, spoke to the Intro to Filmmaking class about his educational background as well as traversing a career in music performance into music producing and then into filmmaking. He talked about overcoming adversity and how crowdfunding made his film, “Blue Like Jazz,” possible.

Want to learn more about the Communication & Media Arts Department at LBC | Capital?