From a Domestic Violence Survivor to a Force for Change

Each October since 1987, the nation has observed Domestic Violence Awareness Month “as a way to connect and unite individuals and organizations working on domestic violence issues while raising awareness for those issues,” according to the National Coalition Against Domestic Violence, whose 2021 theme is #WeAreResilient.

One alumna of the Philadelphia location of Lancaster Bible College | Capital Seminary & Graduate School turned her own experiences with domestic abuse into a ministry for others. 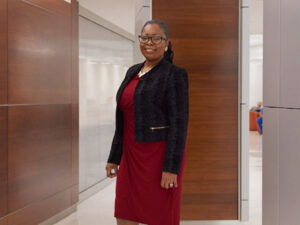 Tarskia Chase (’19), who today works as the Supervisor of Administrative Services for the Surgery Division for Penn Medicine, continues in this ministry named ‘SISTERS’ through her church in Philadelphia. For this year’s observance, she provided information and background to other groups so they could host domestic violence workshops as well.

Read more of Tarskia’s story, reprinted from a 2019 Penn Medicine publication, below:

[Several] years ago, Tarskia Chase started “Sisters In Service To Edify, Restore & Support (SISTERS),” an educational workshop for others affected by domestic violence, at her place of worship, Beloved St. John Evangelistic Church in the Logan section of North Philadelphia.

The program teaches people about the different types of abuse, as well as safety and support systems available in the community for those in need, and features talks from survivors.

“This all got started based on my own background of being a victim of domestic abuse, and just not really speaking about it,” says Chase, who works as an administrative assistant in the Emergency Administration Office at Penn Presbyterian Medical Center. “I put myself in a position working daily as a single mother, while wearing a mask. To interact with me, you would never know that I carried the weight of domestic abuse in my life.”

[More than] twelve years ago, Chase found the courage to leave the situation, together with her two young children, in pursuit of a happier, safer life — and to speak up to help others.

It was later, during her time working toward her Urban Ministry Leadership degree at Lancaster Bible College, that she developed the workshop. She then presented it to her church’s senior pastor.

“I thought it was something that was needed because it’s not a topic commonly discussed within most churches,” Chase says. “The church serves to be a lighthouse in the community in itself.”

That led Chase to present her first workshop, where she and other women in her church shared their stories. “It materialized into really being able to aid more women,” she says.

Every year, the Philadelphia Police Department receives more than 100,000 domestic emergency calls. Over the past 10 years, more than 1,600 people have died in domestic violence incidents in Pennsylvania.

Today, a Penn Medicine CAREs grant supports SISTERS — which Chase plans to use to provide emergency shelter and transportation, toiletries, food vouchers, counseling, and other basic necessities to help women toward a new life.

Chase’s latest workshop took place in October [2019], during Domestic Violence Awareness Month. It featured three speakers (all domestic abuse survivors), as well as a clinical educator of Women Against Abuse who provided a domestic violence training to the women and men who attended.

Tarskia Chase is now six years happily married to Eric Chase, with a blended family that includes their six children.

“I am completely passionate about SISTERS because I can put myself in women’s shoes,” Chase says. “I speak life into a situation and let them know that there is a light at the end of the tunnel.”

[This story was published in 2019 by Penn Medicine.]

Want to study at LBC | Capital – Philadelphia like Tarskia?