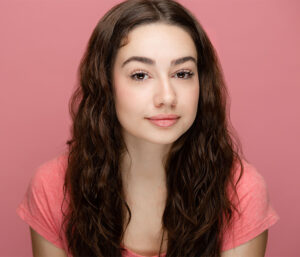 Lancaster Bible College is full of talented students who are using their gifts to glorify God. Junior Delaney Bigley (’23), a Musical Theatre major, certainly has the gift of song and captivates audiences with her sweet voice.

This spring, Bigley was named a finalist for the National Musical Theatre Competition. Out of 24 hand-picked candidates to participate in the competition, Bigley was one of seven remaining singers after her audition in New York City and had the opportunity to perform in the Finalist Concert.

Bigley said she is thankful for LBC professors such as Jessica Dey, Abigail Martin and Jeffrey Martin for helping her prepare for the competition and guided her along the journey. “They are all phenomenal teachers, coaches and mentors with impressive training and background,” she said. “I am very thankful for their help in choosing repertoire, practicing my selections and encouraging me to pursue challenging opportunities.”

The musical fun didn’t stop there, however, as Bigley is consistently auditioning for exciting singing opportunities and roles. She just completed the role of one of the nuns in “The Sound of Music” at Lancaster’s historic Fulton Theatre. She was most excited about her role as the understudy for Liesel, which she described as “an incredible opportunity and experience.” 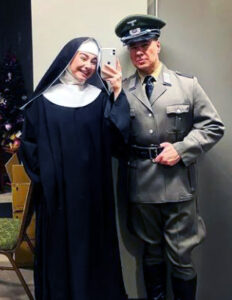 Delaney Bigley and her father, Dr. Robert Bigley, take a moment for a selfie backstage at the Fulton Theatre’s production of “The Sound of Music.” Dr. Bigley, LBC | Capital’s Director of Choral Studies, played Admiral Von Schreiber in the musical that ran through March 27, 2022.

The Fulton’s production of “The Sound of Music” played to a packed house for nearly every show, and the musical was actually extended several days because of its popularity. “I (was) excited to bring this beautiful show to audiences at such an applicable and meaningful time,” Bigley shared.

Thus far in her college theatre career, Bigley’s résumé has been extensive. At LBC, she performed as Zelda in “Singin’ in the Rain,” as well as Ruth in the college’s production of Sight & Sound Theatre’s “Ruth.” She has also performed at The Trust Performing Arts Center’s Black Box Theatre as Irene in “Radium Girls” and as Lucy in the Reverie Actors’ Company production of “The Lion, the Witch and the Wardrobe.”

In high school, Bigley played Fiona in “Shrek” and Dorothy in “The Wizard of Oz.” She’s also performed with many local theatre companies, with favorite roles including LP in the new musical “Social Studies,” Ms. Mullins in “School of Rock,” ensemble for in “Mamma Mia” and “Mary Poppins” at the Fulton, Zaneeta in “The Music Man,” Puck in “A Midsummer Night’s Dream” and Annie in “Annie Jr.”

Lancaster Bible College loves to celebrate students’ creativity and the passions God has placed in their heart. “My passion for singing comes from the Lord,” Bigley stated. “He has given me specific talents that I have the incredible opportunity to hone into skill in order to glorify Him to the best of my ability.”

Delaney is also a member of the LBC Chamber Singers, which was invited to perform at the 2022 Pennsylvania Music Educators Association annual conference. Read more here…

Learn all about our Musical Theatre major!