A theme you will notice in these recaps is how vibrant the campus has been for so many years. The 1990-91 academic was no exception, as fun events, times for prayer and a focus on academics and growth were major parts of the student experience.

Homecoming 1991 was held on the first weekend of October, as a beautiful day was highlighted by Sharon Harris (’91) being named Homecoming Queen and the men’s soccer team earning a victory.

The Lancaster Bible College of 35 years ago was full of clubs, events, tremendous faculty and staff, and hundreds of fantastic students. Clubs like the Sojourners, Pastoral Interest Fellowship, the Social Committee, Teachers United Upon the Foundation of Faith and so many more filled the buildings and held events.

Some of the shows during the 1985-86 academic year included ‘A Man Called Peter,’ ‘Christ in the Concrete City’ and ‘Bridge of Blood,’ while the men’s soccer, men’s basketball and baseball teams starred in the field of competition.

As the calendar turned over from 1980 to 1981, the Lancaster Bible College campus was charging full steam ahead on a tremendous school year filled with events like the Halloween Rollerskate, a corn roast on campus, a carnival night, artist series and friends fellowship banquet. Intercollegiate athletics began to thrive on campus as well, with the men’s soccer, field hockey, men’s basketball, baseball and men’s tennis teams taking center stage.

The 1975-76 academic year was a special one on campus, as Lancaster Bible College and country celebrated the bicentennial of our nation. The Homecoming Parade featured several floats honoring the country, and campus itself was quite vibrant in 1976. From all-school picnics to soccer and basketball contests, the campus was full of activity and life.

Fifty years ago at Lancaster School of the Bible, the new library (currently the Student Center) was nearly completed and was a major expansion for the institution. Forty-two graduates made up the 1971 senior class, and the school featured a newspaper called ‘Scroll.’ There were also several music ministries, including The LSB Choir and Girls’ Ensemble, The Lordsmen, The Calvarymen, The Patrick Sisters and the Encounters. 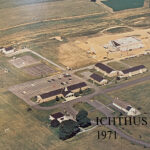 Lancaster School of the Bible was under construction in 1971 as the library (now the Student Center) was on its way to being finished. 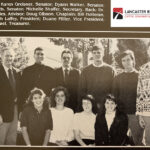 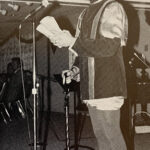 The 1990-91 Christmas Celebration, ‘The Ye Olde Christmas Banquet,’ was hosted by senior Jim Weaver (’91). Guests and students traveled back in time and held a Christmas in Medieval England. 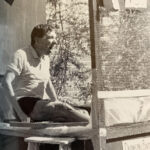 During the 1990-91 academic year, Dean Bob Willey took his turn in the dunk tank during Homecoming. 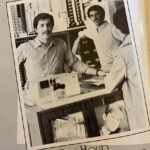 The 1986 yearbook also featured some of the jobs students held during the school year. Students Jim Culbertson (’88) and Mike Julian (’86) worked at Kelly One Hour Photofinishing, a photography store that would print photos and sell film for cameras. 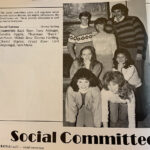 Seven students made up the 1986 Social Committee. According to the yearbook, this group planned dinners, skit nights, roller skating events, the semiformal and more. 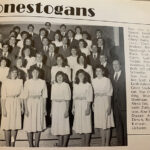 A singing group that has been featured several times on this blog, the Conestogans, look their best during the 1985-86 academic year. 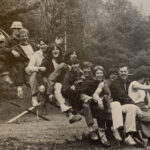 The Good Life Singers musical group took a tour of several states during the 1980-81 academic year and stopped at a park to take a picture on a slide. 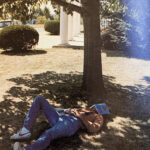 Like all college students have to do at least once in their collegiate lifetime, this student in 1981 is taking a nap under a tree by Esbenshade Hall. 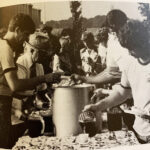 One of the events during the 1980-81 academic year was a corn roast. Students from across the campus enjoyed an outdoor dining event with corn featured in the main dishes. 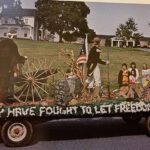 The 1975-76 academic year featured a patriotic parade during Homecoming, as the college helped honor the country’s bicentennial. 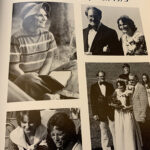 Barbara Busse (’76) was named Homecoming Queen during the 1975-76 academic year. Busse was very involved on campus, serving on the Student Council, as a resident assistant, and she also played on the field hockey and basketball teams. 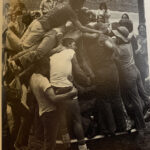 One of the events at the All-School Picnic during the 1975-76 academic year was to see how many freshmen could fit into one bathtub! Can you find the bathtub at the bottom of this picture? 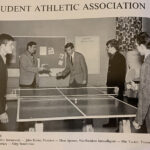 The Student Athletic Association plays some Ping-Pong on campus during the 1970-71 academic year. The student in the middle, Ellis Yunkin, had two sons, Lance and Jon, who would eventually become two of Lancaster Bible’s best men’s soccer players in the early 1990s. 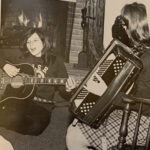 Two students play music in the dorms during the 1970-71 academic year.

Get details and register today!